Robert Builds Back His Life with Healthy Habits 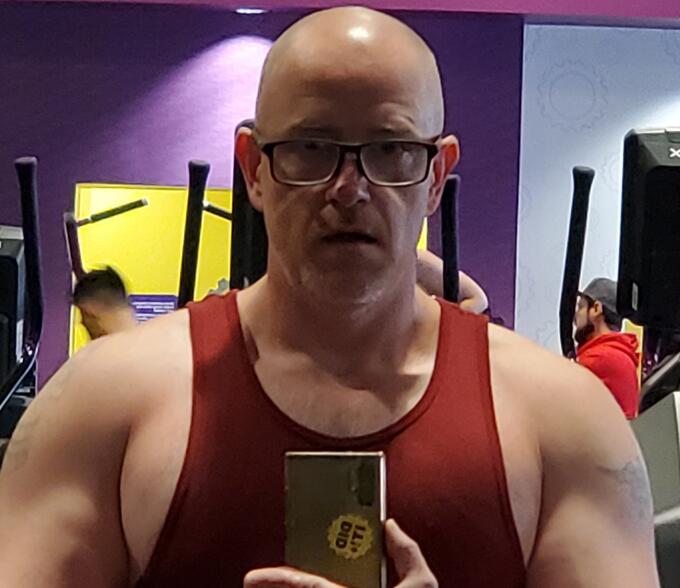 Our Skagit Community Detox (SCD) program and Pioneer Center North (PCN) residential treatment staff heard from Robert (pictured in the gym), a past client who expressed his gratitude for their supportive services during detox and intensive residential treatment. Robert also wanted to let staff know he was doing great and working full-time again. Our staff was elated to hear the update!

Kristi Sanders, health care coordinator at SCD shared that Robert was referred to the detox program as he was struggling with a methamphetamine addiction and needed help. His work gave him leave to get detox and treatment and build a recovery plan. When Robert arrived at SCD, our staff worked with him to ensure a safe withdrawal from the drug, provided substance use disorder assessment referrals and assisted him to ensure his aftercare was arranged.

Many months later, Kristi received a call from Robert. Kristi said, “Robert was an awesome person to work with despite going through detox. He had an easygoing personality and was respectful to all of us. When he recently called me, he shared that he just wanted to thank all the staff for helping him to reach where he is at today.” Kristi added, “I was so happy to hear from him! Robert also shared that he is loving life again and that his new and positive addiction is working out to keep in shape - a much healthier habit.”

After detox, Robert was referred to Pioneer Center North (PCN) for intensive residential treatment. Once in treatment, Robert really engaged in the program and set his goals for recovery to get his life back on track.

Aric Withrow, residential treatment specialist lead at PCN stated, “Robert was an amazing client, one of those clients that makes my job easier and reminds us all why we come to work every day. I’m not a counselor, so our interactions were more about everyday life in recovery, as opposed to the clinical side of it. I talked with him as a sounding board and shared a little about my past experience and repeated tries to get clean and sober. He wanted to hear what it finally took for me to accomplish it, and I was happy to share my recovery path and how I maintain it now.”

Nicole Davis, community engagement specialist at PCN said that that before going to SCD and being referred into PCN, Robert had relapsed and fallen into some trouble because he ran into old friends and started hanging out with them. They were not clean and sober. Nicole stated, “Robert shared that now he wanted to change his life for good and leave his history of incarceration and substance abuse behind him. He knew that was going to lose everything if he didn’t pull his life back together.  Robert told me he had a solid relationship with his father and did not want to let him down.”

Nicole remembered that one priority Robert had, along with his recovery, was to retrieve his personal belongings and computer from jail that had family photos and mementos. Nicole helped Robert to retrieve his items as it was very important to him.

Robert felt supported at PCN and opened up to his counselor and other staff for guidance. He also volunteered to get involved at PCN and soon became his unit’s “Big Brother.” He would meet with new residents in the program to make new client’s feel welcome and comfortable when arriving for treatment. New and old clients might be struggling during their treatment at PCN, and Robert would ask if they needed any peer support, help with their treatment program homework or a motivation boost. He also chaired the substance use disorder group meetings and assigned chores to all residents to get them involved and keep them accountable for their responsibilities. Staff watched Robert as he grew in the program and tried to encourage his peers in treatment to follow his lead.

A goal that Robert focused on was making positive changes in his own life to help maintain his recovery journey. At PCN, he started working out every day to get in shape and set a healthy routine. His workouts included push-ups, chin-ups, squats, free-weights, stationary bike sessions and he played volleyball with other men in the program. He inspired many other PCN residents to start working out also to create a health routine in their recovery plan.

“Before Robert was finished with his treatment program, we collaborated on his discharge plan,” shared, Nicole. She commented, “We discussed what he wanted to see in his aftercare and what steps would help him maintain his sobriety.”

It is vital that our clients have an aftercare plan in place so they have a safe and secure home to release to and a solid discharge plan. Robert’s mobile home was not the best place for him to release to so Nicole worked with Robert on several housing options until he chose the best clean and sober living situation for himself.

Robert shared this statement one month after he finished the residential treatment program at PCN, “I believe that hard work is not really that hard – but skating around well enough to appear you are working hard is.”  After his time, at PCN, Robert continued to focus on  working hard in all the positive channels that have kept him clean and sober on his recovery path, including maintaing his gym workouts.

Nicole said, “I worked with Robert as a bridge from his counselor in the program, to a solid discharge plan. I wrote a letter telling his former boss that Robert had completed the treatment program at PCN successfully, confirmed that the housing we found was a safe environment and set him up to attend an intensive outpatient program upon his release.” She added, “When he called me to say he loved his life, and all was well at his old job and new home, I was overjoyed! This is my bonus on the job when I hear back from former clients that are now leading healthy and productive lives.”