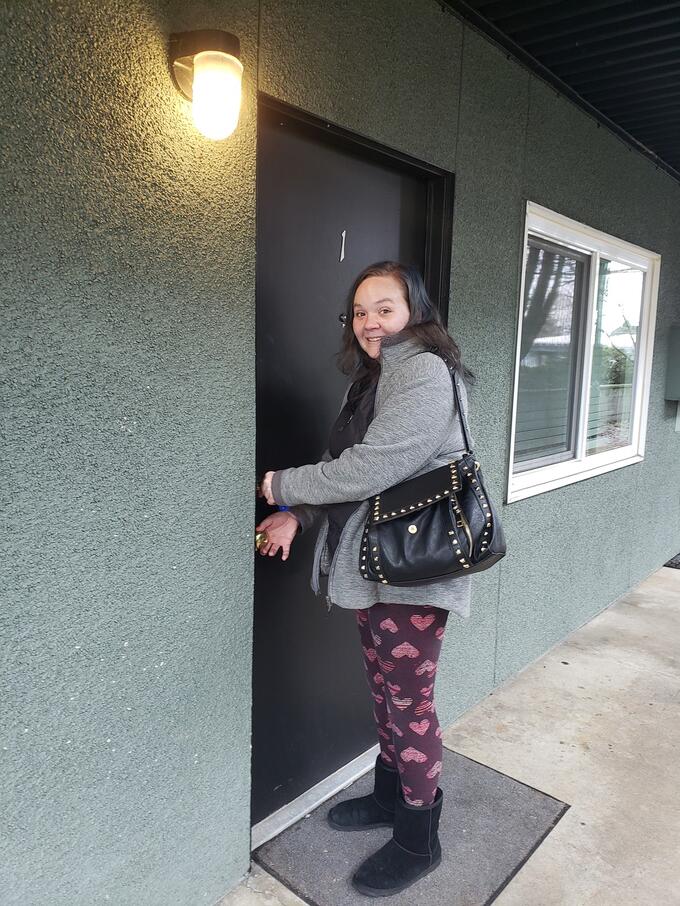 Pioneer Human Services provides housing and employment services through our Foundational Community Supports (FCS) program for anyone who is Medicaid-eligible - even if the individual is not a client in another Pioneer program. Shelly Jones, a FCS supportive housing specialist in the North Sound region shared an inspiring story about Rachael. Shelly met Rachael after she had transitioned from the Snohomish County Diversion Center (SCDC) that Pioneer operates, and into our co-occurring program in the North Sound Behavioral Health Treatment Center  (NSBHTC) in Everett.

Shelly and other Pioneer staff helped to pave Rachael’s path from being chronically homeless, losing custody of her children, and struggling with mental health issues and a substance use disorder - to receiving treatment and counseling, securing stable housing and being reunited with her children. Leslie Hodson of Compass Housing was of great assistance in finding permanent housing for Rachael and approving her for the apartment. Leslie also helped our FCS staff in securing Rachael's approval for the Community Behavioral Health Rental Assistance Program (CBRA) funding that is helping to pay her rental expenses. Rachael’s successful journey is a result of our valued community partnerships, and the programs and support services Pioneer provides.

Pictured: Rachael putting the keys in the door of her apartment.

Diversion from Jail
The last time Rachael was arrested, she was released to the streets with nowhere to go. One night, she slept at a bus stop on the side of the road and a woman at the bus stop gave her the phone number for the Sheriff’s “Office of Neighborhoods” program to contact for emergency shelter. Rachael contacted them for help and she was picked up by Elisa Delgado, a social worker that assisted Rachael with getting into the Snohomish County Diversion Center (SCDC).

Claire Wilson, our SCDC director shared, “The diversion program offers short-term placement and shelter to homeless adults with a substance use disorder and other behavioral health issues, diverting them away from incarceration and towards treatment. Rachael was open to making a positive change in her life and receptive to getting help.”

The center helps to end the revolving door from the streets to jail and back. While Rachael was at SCDC, staff and social workers teamed up to help Rachael get into residential treatment at the North Sound Behavioral Health Treatment Center (NSBHTC).

Residential Treatment
After reviewing several options, Rachael agreed to go to Pioneer’s co-occurring program at the NSBHTC to address her substance use disorder and mental health issues. Once at the NSBHTC, staff  worked with Rachael to address her issues and provide support. Throughout her stay in residential treatment, she became engaged in her treatment and increasingly stable.

Brittany Henness, behavioral health clinician at the NSBHTC commented, “Rachael really responded well to Dialectical Behavioral Therapy and Cognitive Behavioral Therapy. She was able to utilize the skills while in treatment which helped her refocus her attention. She continued to work hard to complete treatment despite her struggles.”

Supportive Housing Services and PACS
As Rachael became more stable, she expressed her interest and need in pursuing housing goals and custody of her children. Shelly Jones, the supportive housing specialist for our FCS program, assisted Rachael in applying for transitional housing through a variety of housing programs. Rachael was provided with several housing options and chose the Hoff Foundation’s faith-based women’s housing program. The Office of Neighborhood’s program provided funding assistance to pay for her recovery housing. Shelly said, “It was so rewarding to witness Rachael’s progress and be able to help her secure housing. She then started working on goals for permanent housing for herself and her children.”

Rachael lived in the stable environment and was approved for in-person visits with her children (they were previously done over zoom). Rachael also met with Pioneer's Parental and Adolescent Counseling Services (PACS) that supports reunification of families currently separated, and works with families that are at significant risk of having children removed from the home due to abuse, neglect or severe family conflict.

Progressing into Independence
Rachael moved forward with her goals and obtained a state ID card her Social Security that she needed in order to start applying for permanent housing. She was also approved for benefits and now has a part-time job that helped to position her for independent living. Shelly added, “Rachael applied for her first permanent two-bedroom apartment for herself and her children and we all prayed that she would be accepted. She recently secured the apartment - we are all so excited for her!  This now allows her to start having her children overnight and builds the needed bridge to reunify her family to be able live together again.”

Shelly worked with Rachael on funding applications to assist her with her housing expenses. Leslie Hodson of Compass Housing was also a tremendous help in securing Rachael's approval for the CBRA funding that is helping to pay her rental expenses. The CBRA provides rental assistance to individuals suffering from behavioral health conditions that prevent them from being able to obtain/maintain permanent housing. This program partners with FCS to ensure long-term permanent housing success for individuals with behavioral health issues, including substance use disorders.

Shelly commented, “Rachael has attended all court hearings for her custody case and told me she followed through with all of the courts recommendations in order to regain custody of her children. I am so proud of her. She is very happy and enthusiastic about her recovery and her future of having permanent housing for herself and her children. It has been a heartwarming journey to witness.”