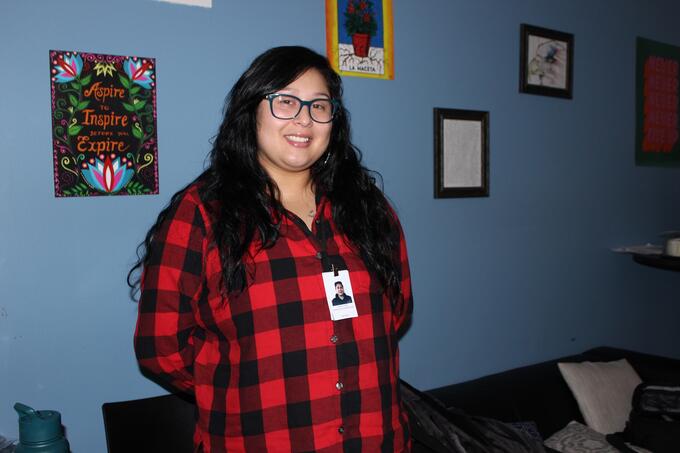 Recently, Jessica (pictured) shared her experience participating in Pioneer Human Services’ Roadmap to Success job-readiness training program in Seattle. Upon graduation, Jessica was hired at one of Pioneer Industries’ aerospace manufacturing plants as a production coordinator. She shared, “I continue to learn new things every day!”

The Beginning
At 18 years old, Jessica got involved in drugs and illegal behavior that would create years of drug addiction, treatment programs, jail time, reentry work releases and broken promises. She did not finish her initial drug court program and either left or was asked to leave the treatment and reentry programs where she was sent. “I feel shame when I look back on my life,” said Jessica.

When Jessica learned she was two days pregnant she got clean and sober on her own. She took it upon herself to turn her life around because she did not want to be a mother in jail - and she definitely did not want her baby taken from her. At one point, the father of her child was threatening to get full custody of their son and she still had old charges against her. Jessica was terrified to appear in court again, but she decided this was the only way to clean up her record, retain custody of her son and get back into the drug court program.

The Judge
For the first time in all her court hearings, Jessica brought her mom and sister with her to show the judge she was back in her families’ life and being a responsible mom to her baby son. Just by chance, the judge was the same person who had presided in Jessica’s previous court hearing. Jessica remembers looking very disheveled and being addicted to meth in that hearing. The judge was now shocked to see the new Jessica standing in front of her looking so healthy and happy. Jessica recalls the judge stating, “In all of my years as a judge, I have never seen a turnaround like yours! You have metamorphosed into a butterfly.”

“There were tears all around, and I am not someone who cries easily,” said Jessica.

Drug Court
Jessica was accepted back into the drug court program and has engaged in it fully. She is in phase three out of five phases, and participates twice a week in the program after work. Jessica was a full-time mother but shared with her drug court program counselor that she wanted to get a job. The counselor suggested that Jessica look into Pioneer Human Services’ opportunities and programs. When Jessica read about the Roadmap to Success program, she applied to help launch a new career.

Roadmap to Success
Once Jessica was accepted into the Roadmap to Success program, she attended five days a week and really engaged in the classroom assignments and discussions. In the program, she was able to polish up her resume, cover letter and learn the latest job search techniques. In addition, her communication skills and self-confidence were being refined and built up.

Jessica was known to ask good questions and really help the other students in class. Jessica said, “One day I led the class for a few hours. I was nervous, but then I realized I could answer my classmates’ questions and assist all of them with their computer skills and resume. I had work experience and some tech skills, and was happy to share what I knew with the other students in the class.”

Employment
While she was participating in Roadmap, Pioneer managers visiting the classroom noticed her helping out her fellow students and engaging in the program. Jessica was asked if she would like to join the Pioneer Industries aerospace manufacturing team and she accepted!

“I was hired as a production coordinator and I work at Plant 1 in the office. In my position, I also go into the plant and work in the part mark area. There is a lot of training offered and I have been participating in the Epicore and Relias training programs. My new job is helping me launch a career in aerospace manufacturing as I continue to learn new things daily,” said Jessica. “I have a lot of support here to help me stay on my recovery and career path,” she added.