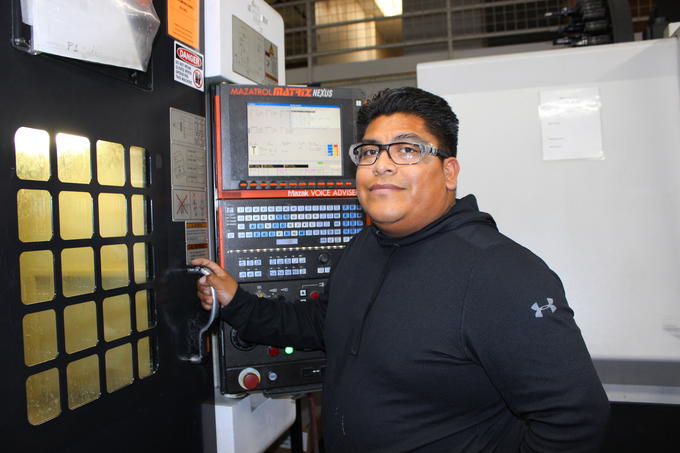 Pioneer hires individuals who have a criminal history, as well as people who have never been justice-involved. Arturo shares his experience in working with other employees who were formerly incarcerated and breaks down the stereotypes.

Arturo came to the United States from Mexico City with his parents when he was 14 years old. His parents always promoted the fact that education and learning is the path to a successful life. After high school, Arturo received a degree as a certified tax accountant. The tax accountant work was seasonal and Arturo did not see enough advancement so he went to Renton Tech and started looking into different career trajectories.

After a little searching, Arturo found available jobs at Pioneer Industries in the aerospace manufacturing division. The positions were entry-level, but there was room for advancement and he learned that Pioneer sponsored and paid for qualified employees’ to participate in an apprenticeship training through the Aerospace Joint Apprenticeship Committee (AJAC).  He looked up Pioneer on the internet and did a little research on the organization. “At first some of the prison stereotypes went through my head when I learned that Pioneer trained and hired men and women after they served their time in jail or prison. I was expecting there to be some fighting on the floor and was prepared to see some bad behavior at work – I could not have been more wrong,” Arturo said.

Arturo made the decision to come and work for Pioneer on a six-month trial. He started in the metal/vinyl division that makes many aerospace parts for Boeing including gators, window panels, and emergency doors. After working several months, he was offered a permanent position and was promoted twice to become a Tech 2 in assembly and metal/vinyl.

“Working at Pioneer has opened my eyes to the stereotypes that society has spread about formerly incarcerated people. I can tell you that 64 percent of our enterprise workforce has a criminal history or is in recovery and they are very professional, skilled and work harder than the average hire. My co-workers know what it is like to be turned down for a position and are appreciative when a company hires them. They are also hungry to learn and very driven to advance in their careers. If I were an employer, I would hire them straight away. Employers that don’t consider hiring people who have been justice-involved in the past are really missing out on a great workforce.”

Arturo added, “My direct boss at work served 30 years in prison and he treats all of us with respect, he is fair and a very solid supervisor. I don’t think you should ever judge someone for their past – take a look at what they can offer going forward.”

School and training is still very important in Arturo’s life so he applied and was accepted into the four-year AJAC apprenticeship program to become a CNC machinist/journeyman. Currently, he is in his third year in the program where he goes to school one night a week and learns hands-on training on the Pioneer plant floor the rest of the week. He is also enrolled in education courses to get his teaching degree. “Who knows, maybe I will be a CNC machinist for the next 10 years and an instructor the following ten years? I believe in keeping my mind sharp and my options open.”