Facing the Truth in Prison and Making Positive Changes 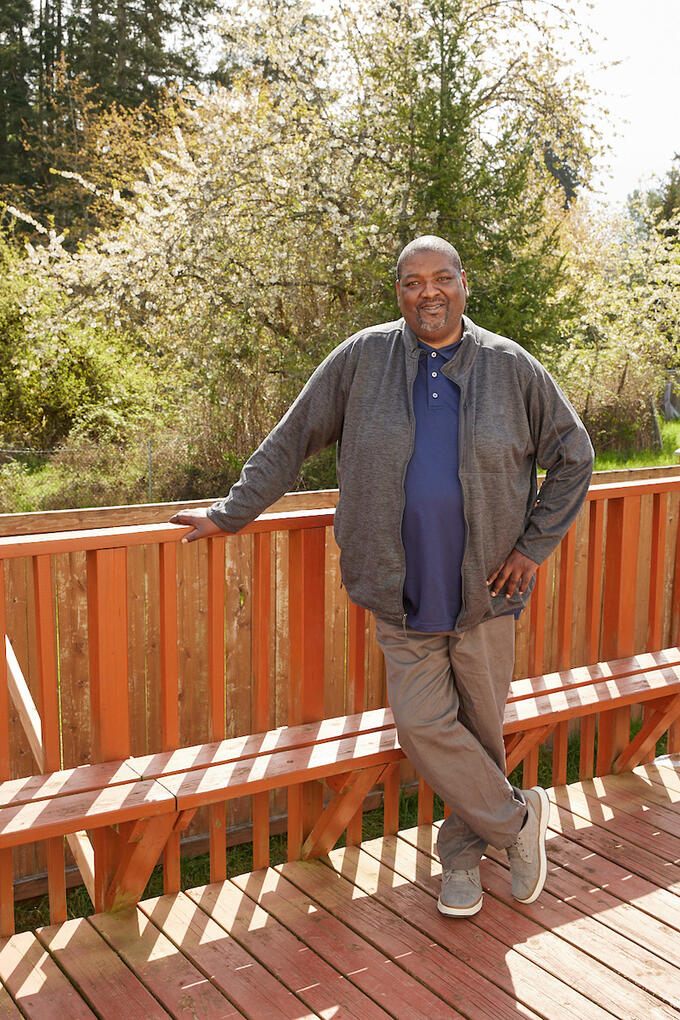 Greg's Story
My first introduction to Pioneer Human Services was in 2003 when I was in the Pioneer Fellowship House residential reentry center waiting to go to court for a federal case. At the time, I didn't know how large Pioneer was, nor how involved they were with persons with criminal histories, mental health or addiction issues.

While I was in the halfway house, one of my requirements was to gain employment. One morning, the job coordinator asked me if I would fill in for someone and she sent me to a building that Pioneer had just sold and workers were emptying out all the rooms. I showed up and contacted Lori Anne, the supervisor on site to get my assignment. When I found her and her staff they were staring at two young men trying to pick up an older and very large TV, and they were having no luck. I watched for a few minutes and asked, "Where do you want it?” I had to laugh as I am a big guy and knew I would have no problem moving that TV. I excused myself and told everyone to please clear the doorway, while I bent down and picked up the TV and carried it into the hallway. Lori Anne looked at me in amazement and asked who I was filling in for? When she learned I was filling in for another temporary employee, she told her assistant that she wanted me going forward. That was my introduction to employment at Pioneer.

While in the Pioneer Fellowship House, I was waiting to go to court. I ended up being sentenced to 32 months in federal prison and was sent to Texas to complete my sentencing obligation. Time went by fast for me as this was not my first or second rodeo. I finally was down to six months and decided to call a friend to let him know I would be home soon. I made the call and told him that I would likely be back in the halfway house in about three months. My friend’s voice went silent and he told me to hold on for a second. He came back on the line and started to read an excerpt from the previous days newspaper with my name included.

I was struggling to understand the relevance of what he was reading. Then the final sentence was spoken. He was reading off the names of the people who had been arrested for a crime and he read aloud, "Also indicted was Gregory ..., who is currently incarcerated at a federal facility.” I was speechless. I had to ask him to read it again, but after hearing my name a second time, my heart fell to my stomach.

Life Lessons in Prison
A few days later, I was transported back to Seattle and was formally charged on another previous crime. After having long and heated arguments with my lawyer, I plead guilty to 56 more months. The amount of anger that was in me was almost unspeakable, but as I look back, that was the best thing that ever happened to me. I was sent to California to complete my sentencing requirements and that's where I met the men that forever changed who I was as a person. These men weren't afraid to tell you the truth about who you were and why you were in your current situation. But most importantly, they were never afraid to tell you when you were wrong.

My rock bottom moment that changed my life and led me to the person that I am today was started by a simple question. One of the men, Mike, asked if I had any kids. I said, “Yes, I have a daughter.” Mike  then asked me if I loved her? I answered, “Yes - of course I do!”

Mike stared straight in my eyes and said, “No you don't! If you did, you would have done whatever was necessary in a legal manner to support her and be there for her. Yeah, you chose criminal activity. You chose selfishness like you've always done evidenced by your three previous incarcerations. You don't love anyone but yourself!” I never wanted to punch someone in the mouth so bad in my entire life! The problem was how do you hit someone who was telling you the truth?

Mike knew I wanted to hit him, and he was expecting it. He then went on to say, "You say you love her, but she's three years old, and hasn't seen you face-to-face, and in all likelihood you won't see her until she's about seven or eight. What kind of life are you giving her? What chance does she have? The man that gave her life is absent from her life in all capacities. What kind of man will she grow up loving? Will she find a nurturing husband who supports her and believes in her or will she find a man that mistreats her and doesn't value her?” In my head I was contemplating the consequences for punching this man, but then I realized he was already punching me relentlessly, except he was using words instead of his fists.

At that very moment I was done. I had to change. My three previous times in prison I did nothing to better myself as a person, that's why I kept going back. I started by changing my attitude. I quit blaming people for things that were happening to me and started accepting responsibility for my actions.

Support Services After Incarceration
When I was released in 2011, I wasn't really sure what direction my life would follow and where I should start. However, I was absolutely determined not to follow my old paths in life. Now I was back at Pioneer Fellowship House after my prison release. I realized I had serious issues. I was faced with having immediate basic needs that included employment and housing, so tackling both of those was paramount.

Pioneer Human Services became the solid platform to start my processes. I reached out to the Facilities dispatcher at the time, Tracy Savage, and explained my situation. Tracy listened to my concerns and needs, and told me to come over to Facilities immediately as she had a job opening. I went right over and was asked if I was going to stay around this time? I said "YES!" I was hired on the spot, and the burden of finding stable employment was checked off my list.

The very next day, I inquired about housing options as finding an apartment is a high barrier to hurdle when you were formerly incarcerated. The discriminating label, "ex-felon," is a difficult one to live with and I knew my housing and employment options were limited. Since I already had success with Pioneer in landing a job, I inquired about finding an apartment. I was given the name of Pioneer’s former Seattle Housing coordinator, Michael Langone. He was a great resource and really went above and beyond to help me. First, Michael worked hard to secure a transitional and affordable apartment for me at a Pioneer housing facility. Eventually, he was able to offer me a Pioneer permanent apartment at the Snider Apartments and that was a huge relief. I now had a stable base with employment and affordable housing to build my life on and my reentry was on a successful path.

Paying it Forward
At work, I continued to apply my skills and learn everything I could. Over the years Ronald Young, Wes Rogers, John Luckie, Kurt Von Wetzel, Shane Albright and Michael Johnson have all taken the time to share their knowledge to help me advance. I have worked up to a maintenance tech III position in Facilities and often find myself in a position to help other newly hired employees trying to adjust to life after incarceration or addiction.

From experience, I know what is needed and often can help guide people in the direction of support, whether that comes from Pioneer or a partner organization. It’s important for newly released folks to know there is wrap around support services at Pioneer and via other community organizations. The challenge is getting people to open up about their needs. Once I find out what a co-worker needs, I can introduce the support services available and how to contact them. Often, I can fill that void and it makes me feel good. Paying it forward is a life motto. I always share with people that most importantly, you should not be afraid to ask for or accept help. And, don't be afraid to cut off those people who don't want to see you succeed.

Before my mom passed away, she had a saying that helps me to this very day. My mom would say, "Just because you call somebody your friend doesn't mean that they call you theirs. Weed your garden every day.”

A New Home
In 2021, I hit a milestone when my wife and I closed on a home and we were able to move the family in right before Christmas. Pioneer’s Snider apartment was the foundation and allowed us to save money, but our new home gives us much more space and the kids have a yard to play in and areas to plant flowers, vegetables and fruit. We are so grateful for the new home and the comfort to all be together under one roof. And, I’m thankful to Pioneer for fulfilling my basic human needs when I needed it and being a support in my new life.