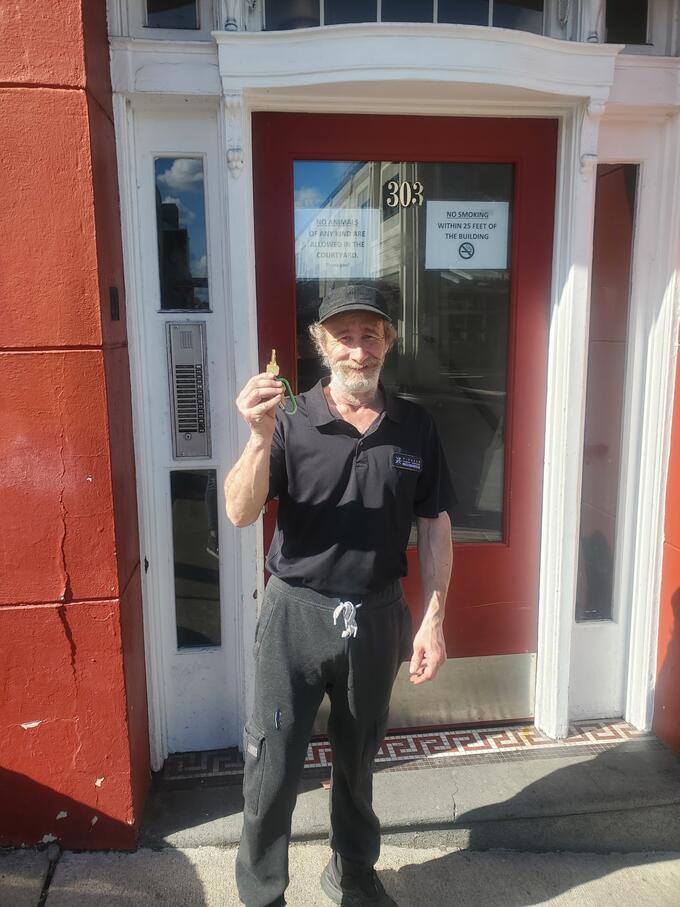 Our Food Services’ commercial kitchen in Tacoma was overjoyed to share a story on Buckley, an amazing employee that started working in the kitchen while he was still homeless and living in an RV in downtown Tacoma. Chris Murphy, director of Food Services; and Lana Tourigny, kitchen manager in Tacoma; are very appreciative of Buckley for his work ethic and helped him to secure stable housing.

Pictured: Buckley with his key at Pioneer's St. Helen's apartments in Tacoma.

Finding Employment
Buckley was hired at Food Services via a temporary employment agency (Remedy Staffing) in June of 2021. He had worked on and off in janitorial type work and manufacturing prior to Pioneer. After a few months of working as a temp at our Food Services, Buckley was hired on as a full-time employee with full benefits.

Buckley shared with staff that he was living in an RV with his sister, who battled Melanoma cancer and is now in remission, and her two adult children. He had been living in the RV for two and a half years.

Once Buckley was hired at Pioneer, he rode his bike to work regardless of the weather - including the days it snowed up to six inches. Pioneer management reported that he has never been late to work or missed a shift.

A Great Work Ethic
“We are so darn proud of him. He has worked very hard despite all of his hardships and now has stable housing and employment,” said Chris Murphy.

Buckley has been consistently kind and sweet to all the staff that work in the Food Services kitchen. He has also trained several people that have cycled through via the temp agency. Chris Murphy stated, “We rely on him to get all the work done and rarely have to give him any instruction anymore. He just asks clarifying questions and gets to work utilizing staff that are here through the temp agency. You would never realize the struggles he faced being homeless before and after work. When he shows up to the kitchen he is happy, attentive and ready to conquer whatever amount of production and work we have for him that day.”

Being Homeless
In the past, management asked Buckley questions about being homeless and having to move around throughout the city often. He shared the ins and outs of getting kicked out of one place and having to relocate to another part of the city. Usually, the sweep-up (forced move) was caused by another homeless person using or selling drugs, or letting the litter fall out into the street.

Chris shared, “I think the biggest negative in his perspective are the people that drive by and throw things, and yell profane insults at all hours of the day and night to the homeless. They would tell him to ‘get a job’ or ‘homeless people should all die'.” Buckley would often use his PHS paycheck just to rent a motel room on his days off so he could catch up on his hygiene, watch a little TV, fill his propane tanks, empty his portable septic system and sleep in an actual bed.

Buckley has lived at St. Helen’s for over a month now and could not be happier. The smile on his face all day never gets old.  Buckley said, “It’s been a long road but I’m finally feeling like I’m getting to that place that I’ve always wanted to be. I finally have job that I look forward to coming to when I wake up in the morning and a bed at night.”

Lana Tourigny and her boyfriend, Mark, were so happy when Buckley moved into his apartment. However, they quickly realized he had virtually nothing to move in with, so they generously brought him house warming gifts that included a loveseat/couch, TV and stand, hand towels, bathmat and a shower curtain.

A Model Employee
Lana Tourigny said, “It has been an honor to be on the sidelines and watch Buckley’s life unfold.  He is one of the best employees we have ever had at Food Services. Working with people like Buckley is why I love my job at Pioneer so much. His light shines bright!”

Chris Murphy added, “Buckley has been a big contributor to our business at Food Services. He gives us 100% of everything he has to offer every day. It has made me ask myself the question, 'Have I been giving 100% of what I have to offer to my job at PHS?’ I have been deeply inspired and motivated by his drive and attitude. Watching him struggle and succeed over and over again has given me a whole new perspective on life.”