Dudley's Path to Becoming a Productive Citizen in the Community 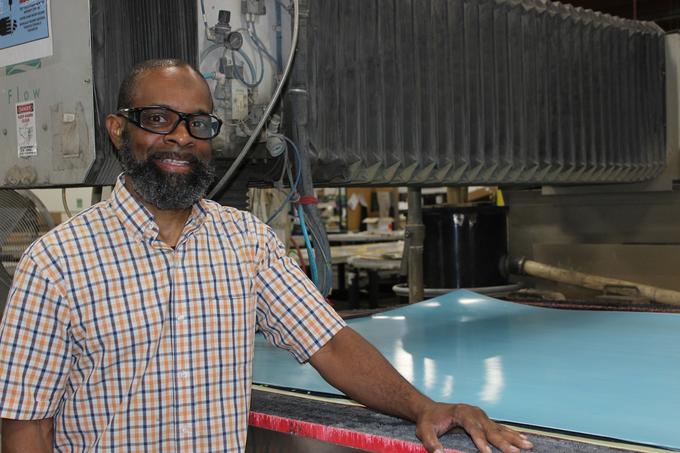 “I spent over half of my life in prison and I am NEVER going back. I have worked hard and built my new life with the love and support from my wife and friends, my faith and the tools Pioneer provided. If I can do it, others can too.”

After the death of Dudley’s mother, he lost the love and support every child needs at six years old. He was left with a father that couldn’t seem to express any love and responded to a young boy’s grief and bad behavior with brutal force. When Dudley was ten years old his father turned him in to the foster care system in California as he felt he could not deal with Dudley anymore. This action led to Dudley making bad decisions for himself and feeling he did not fit in anywhere. By the time Dudley was 17 he was committing crimes, arrested and would spend the next 31 years behind bars.

Incarceration
Dudley shared, “Once I was incarcerated, I made a few positive choices to try and continue my education and stay busy. First, I got my GED, and then I got my Associates degrees in prison participating in a program run through Centralia College. My degree in General Arts taught me to write and be able to perform basic business office tasks. After that I also studied to earn my Associates in Tech and learned facilities maintenance like plumbing; welding; working manual mills, lathes and other equipment. It is very important to stay focused when you’re inside – work towards finishing something!”

Dudley’s first job in prison was a janitor position and he earned 25 cents a day – but it was a job. Following that he worked in welding for a short time but felt he was getting burned too often in that line of work so he eventually transitioned into working in an administrative position for Correctional Industries in procurement. It was more of an office job where he could utilize his Associates degree skills and he worked in that position for his last 20 years of incarceration.

Re-entering the Community
At 48 years old, Dudley was released from prison. Three years prior, he was found eligible for parole by the Indeterminate Sentence Review Board (ISRB) and given a Mutual Agreement Plan (MAP) program to start his reintegration process after such a long sentence. He began by going to a transition camp.   After about six months he was sent to a state work release in Seattle, operated then by Pioneer Human Services. He was helped by his community corrections officer (CCO) in getting his ID and other needed items to help him prosper in society and procure work. His CCO wanted him to secure employment immediately so he landed a telemarketing position at a debt collection agency that ended up not being able to pay its own employees. The CCO then pulled everyone from that company and Dudley was hired in a temporary position at an advertising inserts print house. He needed solid work though and learned about a position at Pioneer Industries.

“I remember being interviewed by the head of recruiting for Pioneer. She told me that even though I had been incarcerated a long time and had very limited experience working outside of prison, she felt that I deserved a chance and hired me. I learned that was what Pioneer was all about – giving people a chance to change. We have to work at it but Pioneer can give you the tools needed to build your path,” Dudley said.

Employment at Pioneer Industries
At Pioneer Industries, Dudley participated in hands-on training on how to deburr metal parts, read a caliper, utilize math skills in measurement, perform aerospace part marking, bond cargo liner parts and many other tasks. Eventually, he moved up to a technician position and learned to inspect, approve, stamp and buy-off on an aerospace part so it was traceable. Dudley excelled in his work and before long the plant supervisor asked him if he wanted to learn how to operate a waterjet. He agreed to be trained as a waterjet operator and learned how to maintain his machine. After a few years he moved up into group lead at swing shift where he operates a waterjet and makes sure all equipment is operating properly.

Dudley stated, “Work is very important, but in my personal life I was fortunate to have a friend that introduced me to my amazing wife who I’ve been married to for nearly seven years now. She reminds me to keep in touch with other individuals I was previously incarcerated with and check up on them to give them moral support. And we practice giving back to the community by taking prepared food to homeless areas like Pioneer Square to feed people who are less fortunate. It’s important to ask for help and work on yourself after prison, but it is just as important to give back and help others.”

Pioneer is very proud of Dudley and the steps he has taken to build a life for himself after being incarcerated for so many years. He really is a model employee and citizen in the community.

Dudley shared, “Many people that get released from prison have no family or a support system to rely on or help them make good choices. Others face obstacles in finding work because of their past convictions - and having a job is your ticket to surviving. I would say that organizations like Pioneer fill that gap. Pioneer has resources to offer like counseling, drug treatment, housing and job training so you can re-establish yourself. If you get hired by Pioneer, you have access to amazing benefits and a circle of people that will support you. My family and faith has centered me but Pioneer has provided me with the basic tools I needed to become a respectable citizen in the community. It’s important to let others know that Pioneer is here to help.”