Community Partners Work Together to Secure Permanent Housing for Scott 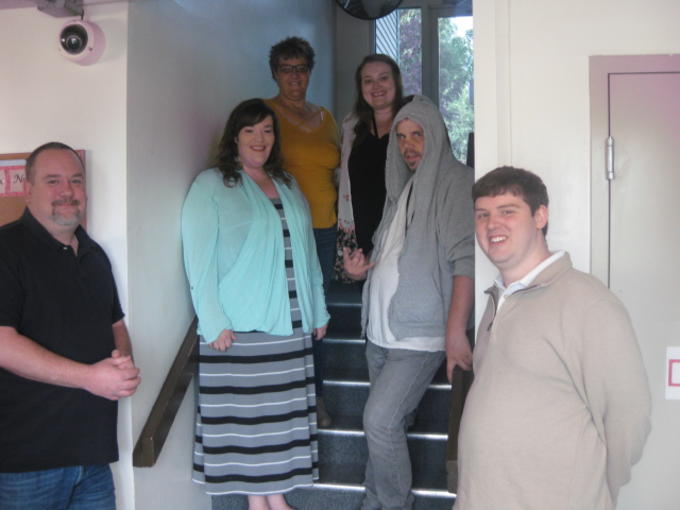 Our Phoenix housing program in Spokane provides transitional housing (up to six months) for individuals with behavioral health conditions while they work on obtaining permanent housing. Participants in the program need to be supportive of recovery-based housing.

Scott came to the Phoenix program from Eastern State Hospital (ESH). Before his engagement at the Phoenix, he had lived in the Carlyle, another Pioneer housing program in Spokane. Unfortunately, when he was living at the Carlyle, he had to leave due to bad behavior and rule violations and that resulted in him returning to ESH.

When The Phoenix staff first received the referral for Scott for transitional housing services they were concerned because of his previous behavior while staying at the Carlyle and other facilities where he had resided. The Phoenix staff was informed that in the past when Scott experienced crisis he was a high risk to be hospitalized or incarcerated. However, they made the decision to work worked closely with his ESH discharge planners, Department of Corrections (DOC) officers, and Frontier Behavioral Health (FBH) clinicians and their peer support to ensure that a strong plan was in place to prevent crisis and/or handle any problems in a prompt and beneficial manner.

After meeting with Scott at ESH, the Phoenix staff still had some concerns about his safety and ability to be successful in the program. He had been incarcerated or hospitalized for the previous 16 years and therefore did not have many life skills that suggested success in an independent setting. During that visit Scott stated, “I am ready for independent housing. I don’t feel like I need this place (ESH) to feel safe anymore. I’m ready to be on my own.”  This statement spoke to his readiness to have independence and helped offset our staff’s concerns.

The Phoenix staff met with Scott’s treatment team one last time to reevaluate his needs, address final concerns and talk about his discharge plan. During this meeting Scott was introduced to his Department of Corrections officer and was notified that Scott was going to be part of a new program called Offender Reentry Community Safety. This program pulls together many agencies that work together to provide the services needed.  Scott was re-introduced to his GOSH (Governor’s Opportunity for Supportive Housing) specialist from his coordinator at SNAP (Supplemental Nutrition Assistance Program). It was a fantastic team!

Scott made a couple of “trial visits” to the Phoenix to become acclimated, and even cooked a few meals during these visits. He was officially admitted to the Phoenix housing program a short time later. Upon move-in, Scott was visibly moved and excited to see his unit completely furnished by the GOSH program, and wanted to show anyone and everyone how grateful he was. FBH staff and clinicians promptly engaged with Scott shortly after admittance, and visited him at the Phoenix every day for his first week to ensure he was stable and doing well. Scott did experience a minor mental health crisis after his first month, but his entire team acted swiftly and collaboratively to ensure he was safe and able to get back on track. FBH staff was able to identify the cause of the crisis, and with the assistance of Phoenix, they were able to create a plan so that it would not be a continuing concern.

During Scott’s time at the Phoenix, he was able to make many different friends with others in the program and the staff alike. Most days the Phoenix staff would hear laughter, jokes and music coming from his unit while he was cooking for, or entertaining others. He often kept the staff company during their shifts with stories about his life, jokes, simple harmless pranks and even taught everyone new games that he had learned throughout life. Scott would talk about all of the accomplishments that he was making regarding his mental health, housing and personal goals with a sense of pride. His DOC officers were constantly praising him for his success and would reward him for his program achievements.

At the beginning of June, Scott was notified by his GOSH provider that she had secured a permanent home for him and he would be able to move into it by the end of the month. Scott was both excited and apprehensive at the same time, and vowed to continue to make great leaps forward. At discharge from the Phoenix Scott stated, “I love my apartment, it is new and fly.” Scott moved from our program with nothing but smiles, his trademark fist bumps and said, “I will miss you guys. This program did a lot for me. Thank you.”