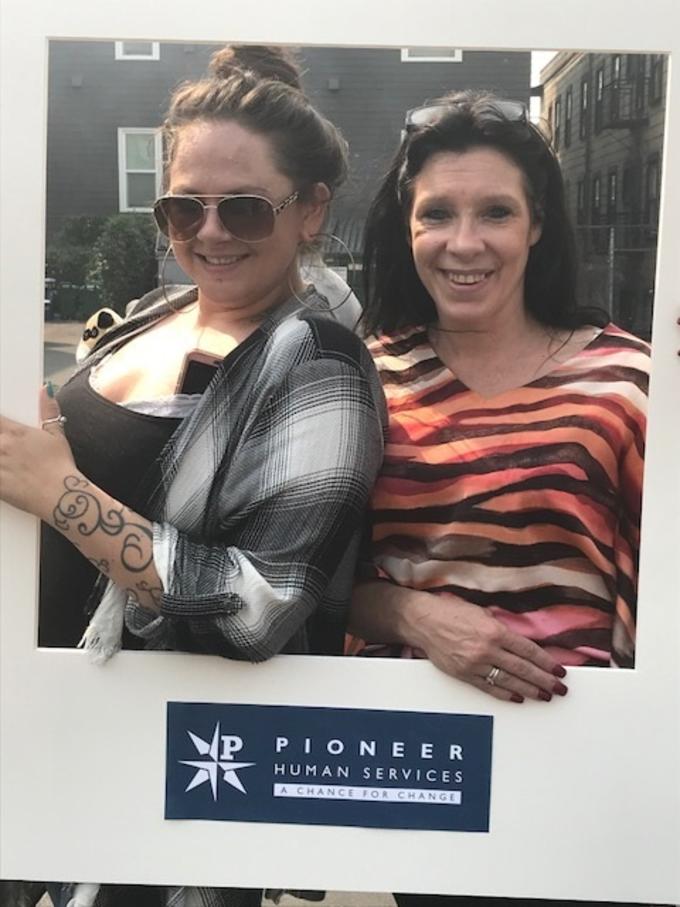 “Pioneer made it reachable to maintain a real life, to have family and to start to love myself.”

Robin can personally vouch for how much the right support matters. She is one of the most engaged residents in Pioneer Human Services’ Tacoma Housing apartments. However, she wasn’t always in a healthy place personally where she could contribute to her community.

Robin is very upfront about her past saying, “I was a hard core addict.”

Robin had been in the depths of her addiction for over 30 years. She doesn’t shy away from her dark past or being honest about the kind of things she used to do to feed her addiction. She was “in the game” constantly, until she was arrested and charged with drug trafficking in Spokane County in 1990. After ten years in prison, she was released and had limited support so she fell back into addiction. Robin was arrested for drug delivery in 2018 in King County. That year she was also given the opportunity to participate in the King County Adult Drug Diversion Court.

“That’s when it all started for me; that’s when my life started to turn around,” Robin said.

King County Drug Court requested she enter the Transitional Recovery Program (TRP) in-jail at the King County Maleng Regional Justice Center that Pioneer operates. There, her first counselor, Bev Quinby, TRP clinical manager, challenged her to really go deep and get in touch with her own feelings, and Robin shared, “That was the most scariest place to explore in my addiction.” Through her work with Bev, Robin was able to explore her feelings and trauma and deal with them on a level where she didn’t need the drugs. She was able to accept things and take responsibility.

After drug court, a program Bev really speaks highly of, Robin was connected with the resources she needed to thrive and to live a better life. This new life was free of the chains of addiction, and she attained it through her work with Pioneer’s counselor. One important step was securing transitional housing at Pioneer’s Dalton House that serves individuals in drug court with rent-free housing. This allows tenants to really study the work in the drug court program and focus on their recovery, rather than worrying about due rent. Robin was then connected with peer mentor training courses and she took a facilitator course in addition to receiving mental health first aid training. She was also referred to the Rainier Valley Food Bank, where she worked as a volunteer for a year and got exposure to being part of a community.

Before she graduated from drug court, her case manager at the Dalton House coordinated a smooth transition into Pioneer’s permanent housing in Tacoma. Robin had never before filled out a rental application, but her case manager helped her and connected her with NW Furniture Bank where she was able to select her own furniture for her new apartment free of charge with a Pioneer voucher that also covered the delivery fees. Robin is clearly proud of the fact that she was able to move into the Tacoma housing one month before graduating from drug court.

“The transition was perfect timing. Pioneer made that happen, where I wasn’t homeless or stuck somewhere else when I graduated from the drug court program. It was a smooth transition,” she says.

Through her connections with drug court, Robin was able to find and receive continued supportive help in the community with her recovery from substance abuse. She started attending a sobering support group. Robin stated, “Drug court’s support was really a blessing. And now everyone in Pioneer’s Rialto housing program is clean and sober, and they really care. Since I moved into the Rialto, Stephen, Pioneer’s resource guy, has helped me tremendously in getting set-up as far as getting food, decorations, and participating in art night, and crochet every other Wednesday. Also there are recovery support meetings held onsite at the Rialto house that I can attend.”

Robin counts the community support she has been able to receive as the most important part of her recovery. She clearly has internalized this support, as she has been one of the most active residents at the Rialto in helping to organize community events, groups and support for her peers. Already, she has organized the Rialto’s women group to promote a culture of “women supporting women.” Robin was also key in organizing the “Harvest Party” at the end of 2019, a very successful Pioneer Housing event with her peers in attendance.

She continually expresses her gratitude for her community at the Rialto for helping her to maintain sobriety and thrive in her own life. “Since I’ve been able to have all this access to community-based stuff and so much support, my drug addiction has not arisen again. Pioneer is kind of like family… they care. They’re willing to give second chances.”

When asked about what else contributes to her recovery, she firmly stated, “GOD, literally,” then explained, “This is a God send, because without Him, this wouldn’t be possible. I couldn’t have done anything without Him.”

Beyond that, she has reconnected with her family. They encourage her to do well, along with, “A solid significant other, who is clean and sober now and keeps me on my P’s and Q’s,” Robin shared.

Where her focus was once exclusively on maintaining her subtance abuse, she is now able to think about her family. This shows her how much more life has to offer than the streets. She notes, “Pioneer made it reachable to maintain a real life, to have family and to start to love myself.”

The calmness and reassurance of the Pioneer staff and community around her continue to help her thrive. Robin feels confident in her ability to reach out to anyone in Pioneer for support if the need arises. Her peer relationships, however, are her most important support system.

At one point, she says, “I was a crack fiend. However, now here I am, two years later, out of drug court, out of transition, into permanent housing, living life happy and having great relationships with family.”

Robin firmly added, “I would recommend anyone who’s going through an oppressed time in their life to reach out to Pioneer for any type of support. They have resources and people who really care.”