Recovery is a Journey - "No One is a Lost Cause" 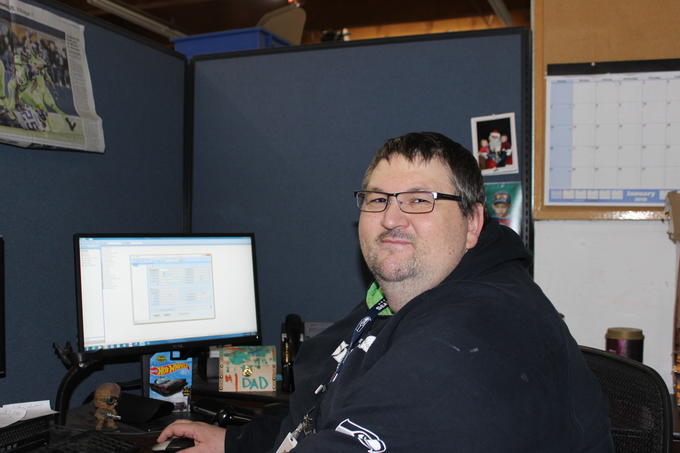 “Pioneer is about giving second chances to people – and sometimes giving third and fourth chances because not everyone can get it right the first time. It is not easy to erase a lifetime of bad choices and a negative mindset. It was really amazing to be accepted – instead of judged. ” Ben

Ben works as a material handler for our aerospace cargo liner division at Pioneer Industries. It’s a busy division and he does whatever it takes to keep things organized and streamlined. Previously, he worked at the Pioneer Distribution Center (PDC) for a few years in shipping and receiving of aerospace parts. However, Ben’s work history and life was not always as stable and happy as it is today.

In his twenties, Ben’s marriage dissolved and his wife left with his baby daughter without a trace. He was heartbroken and started taking pills to numb the pain. Years later into his pill addiction, his mother died and the loss was overwhelming. He was introduced to heroin and he felt it made all of his emotional pain and anxiety temporarily subside.

Evolving into a life of addiction and crime to support his habit, Ben spiraled out of control. He got an infection that ended up in his heart. When Ben didn’t have the strength to get off of the floor for several days at a fellow drug user’s apartment, his so called friends just dragged him out to the street to die rather than helping him. A true friend, who is now clean and sober herself, showed up as he was being dragged outside. Ben had collapsed into a wall face-first and she felt his pulse fading and called 911. Ben woke up in the hospital several days later and was told he almost died of renal failure. “I had been in a coma and was lucky that God spared my life. My sister, Kim, was notified of my situation and really prayed for me. She has always been my rock.”

Ben was released from the hospital and was allowed to live with his sister on Whidbey Island where he was introduced to Narcotics Anonymous (NA) for the first time. Unfortunately, Ben was not ready for NA and he relapsed. He ended up taking his sister’s car without permission to get drugs and she had to ask him to leave her home – she was broken hearted.  Ben shared, “I spiraled back into addiction by my own choice – it was nobody’s fault except my own.”

After being in treatment, Ben learned about Pioneer Human Services from his brother and was accepted into the Roadmap to Success (RTS) job-readiness training program. Before he even graduated from the training program he was hired at the Pioneer Distribution Center in an entry level position. “It felt good working again and I was able to start utilizing things I had learned in RTS like the power of using positive affirmations in my life and forgiving myself. The program not only helped me apply for work and get prepared, but it taught me how to project positive thoughts and start building back my feeling of self-worth. Unfortunately, I still did not understand the power of the disease of addiction though,” Ben said.

While Ben was progressing in his work, the self-sabotaging feelings started rising and he relapsed again.  The recovery journey was a rocky road for Ben as he ended up back in jail for nine months at which point he tried the in-jail treatment program. When he was released, his brother offered him housing and told him about the Alano Club, a safe place from drugs and alcohol where you can hang out all day and attend NA/AA meetings.  Ben was on the Department of Corrections supervision and after a few days of being released Ben asked to be placed in an inpatient treatment program because he knew he needed more help to stay clean.

When Ben got back from the inpatient treatment program he started attending NA meetings again where he met an amazing group of people, especially Adrianne and her mom, Anne. “It was the biggest chapter in my recovery, because this group of strangers made me feel welcomed and loved. Adrianne specifically loved me when I couldn’t love myself. Adrianne and Anne taught me that I was enough.”

About this time, the support group recommended that Michael Langone, Pioneer’s housing program manager, should be Ben’s NA sponsor. Ben had previously met Michael when he was working at Pioneer and living in the housing. Ben shared, “It just felt right. I was still struggling with addiction and with all these new found feelings that I did not understand. Michael was a solid mentor.”

Ben realized that he and his friend Adrianne were starting to have deeper feelings for each other and he was really getting very attached to her son. However, he slipped again and received a DOC violation. Ben lied to Adrianne about having to go back to jail. “The lie broke Adrianne’s heart and it was at that point I felt something inside change. I realized that I was feeling a love that I have not felt in a very, very long time,” stated Ben.

After this relapse, Ben  promised himself and Adrianne that he would never use again. He talked with Michael his sponsor about his feelings and what he wanted, and Michael laid out a plan. “Michael told me to start the NA 12-step work and really engage in the assignments. I did this and seeing it all on paper was sobering in itself.  I have been clean and sober since 1-27-2016 and plan to stay that way!”

After six months being clean and sober Ben reached out to his old boss, Vicki Cleveland, director at Pioneer Distribution Center. “Vicki told me that if I was ready, I should re-apply for work. She encouraged me and was all for giving me another chance as I was fully engaged in my recovery program and six months clean and sober. That’s what Pioneer is all about,” Ben shared.

Ben also got into Pioneer’s housing program and has found his apartment manager, Dexter Pearson, to be extremely supportive, going above and beyond. Dexter checked on him daily, making sure he was alright and encouraged him to keep pushing forward. “So many Pioneer employees surround me and support me in the housing program. There is a lot of love and caring going on daily. We care for each other as recovery is a journey,” said Ben.

Today, Ben is working at Pioneer Industries in Seattle and is engaged to be married to Adrianne. They are raising two sons, Adrianne’s son with her previous partner and the son that she and Ben had together. Ben focuses on living a clean and sober life; raising a family; and doing the right thing for himself, his family and others. He often gets a call from his sponsor Michael to go and speak to residents struggling in treatment programs to share his journey and install hope in others. He also has a wonderful relationship with his sister Kim again – she is proud of him.

“I want this life. I want to help others now. I am surrounded by good people, support and love. It has taken a while, but I’ve really accepted what it means to be clean and sober, and what it means to accept God into my life. I realize that I never have to get high again and NOBODY is a lost cause.”