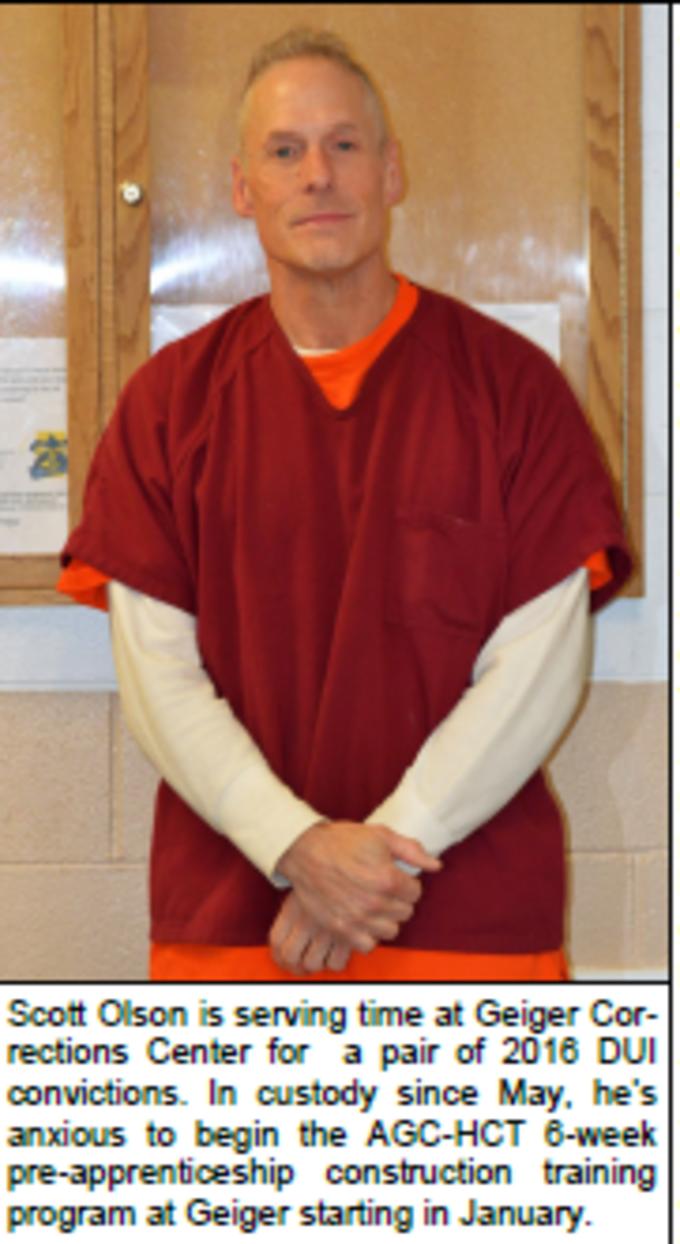 We were so proud to have the in-jail, intensive outpatient (IOP) treatment program that we operate, along with our staff members, called out in Spokane County Detention Services' winter 2019 Community Corrections Newsletter. The voluntary program is extremely popular and has been operating at maximum attendance with a waiting list thanks to our terrific staff. Scott was featured in the county's newsletter as one of the many success stories that has graduated from the substance use disorder program.

Scott Olson came to Geiger Corrections Center in Spokane last May after failing to comply with release conditions on a pair of 2016 DUI charges. “I worked as a delivery driver for a gas and propane company for 15 years. When I was arrested for DUI, I lost my commercial driver’s license, and my job. I was looking for another good job, but I had spare time and didn’t manage it well. After my parents died, I received a second DUI, and my life pretty much came crashing down, financially and marriage-wise. If that wasn’t enough, I was in warrant status for two years. Judge Wilson was not impressed.”

Scott offered no excuses. “I’m the one who relapsed and the one who put others in danger. And I’m the only one who can fix this. More than anything, I’m thankful nobody was injured.”

Since coming to Geiger, Scott has been a model inmate with no behavior infractions, active in reentry programs, attends Geiger’s AA gatherings and has been a dependable leader on work crew. “The Geiger AA volunteers lead busy lives and are accomplished people. They give up their Saturday mornings to come out here. Thanks to all the volunteers, and the treatment staff, too.”

Scott, a Spokane native, graduated from University High School. “I have two grown kids, a new granddaughter, and a wonderful fiancée, yet here I am in jail. It’s tough knowing you’ve let them down when you’re supposed to be the one helping them. I’m fortunate to have the opportunity to regain their trust. It’s a big motivator.”

While at Geiger, Scott completed an Intensive Out-Patient Treatment with Pioneer Human Services counselors Linda Gurtner and Dominic Marcilla. “This is the second time I’ve completed treatment. The first time it was all new, I had lots of problems I was trying to sort through, and I just went through the motions. Here at Geiger, I had more time to concentrate on the lessons and focus on the elements that were relevant to me. I feel good about not relapsing this time. At age 57 I’m not a youngster anymore, but l have good health and I’m lucky to have a path sobriety. It’s what I want more than anything; for myself and my family.”

As a valued member of Geiger’s work crew, Scott was a mainstay on the fairgrounds crew this past summer. “One crew works out there every weekday during the summer, then during the Interstate Fair we have four or five crews there every day. I work a lot with Officers Ken Conwell and Jason Britz. The officers keep everything light-hearted, and it’s great to be out in the community working with them all day.”

Scott will be entering the Associated General Contractors “Headstart To Construction Trades” program at Geiger beginning in January. “Building and construction work is still plentiful right now, so framing, heavy equipment operation and having an OSHA certification will be helpful. I have work lined up when I get out and will continue in outpatient treatment. I’m anxious to rebuild my relationships, regain my driver’s license and be part of my new granddaughter’s life.”