Drawing from Past Experience to Now Give Back to Others 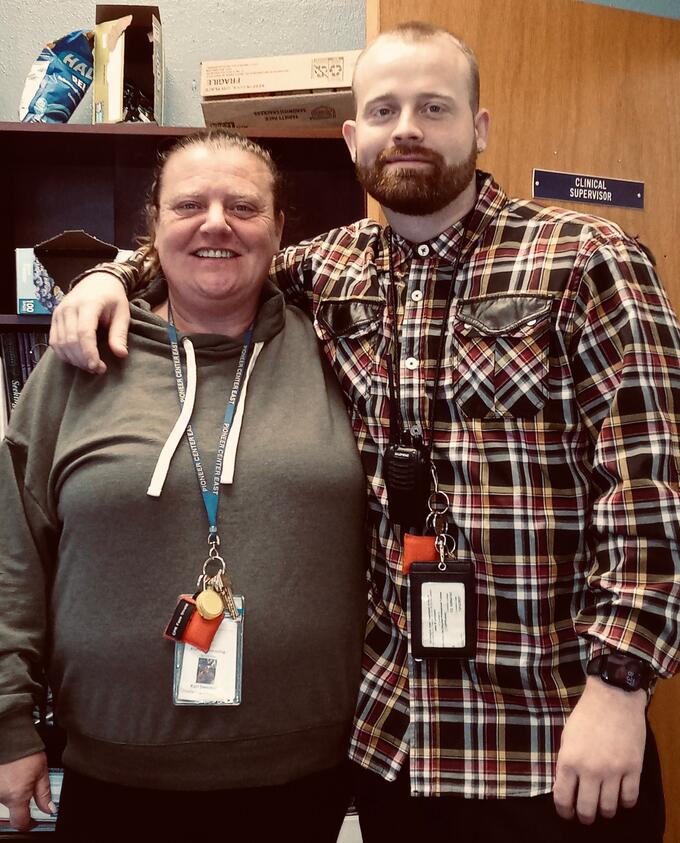 We are always happy to share a success story on a former client who is now a successful employee! Kari Swecker (pictured left), clinical substance use disorder (SUD) manager at Pioneer Center East (PCE); and Jake Johnson (pictured right), SUD professional (SUDP) at PCE; shared Jake’s journey from being a Drug Court client in 2015, to graduating from the program and from school, and now working at PCE. The center is a residential substance use disorder treatment program in Spokane. PCE provides semi-secure, intensive inpatient treatment for high-need individuals who battle chronic substance use disorders.

Kari was first introduced to Jake back in 2015 when he was a client in the pre-conviction Spokane County Therapeutic Drug Court program that Pioneer operates at Pioneer Counseling-Emerson Clinic. In the Drug Court program, counseling staff work with clients over the course of a one-year long service. All patients are eligible to receive support services including housing, transportation funds, childcare and peer mentoring. Upon successful completion of the counseling program, their felony charges that are a result of their substance use disorder are dismissed. Kari worked at Emerson Clinic at the time and became Jake’s counselor half way through his treatment.

Kari stated, “Jake and I really bonded over his drive and determination to be sober, his willingness to engage in recovery services and his desire to make positive changes in his life.”

Jake had shared his interest in helping others and working in the treatment field now that he had come through various programs. He pursued education in the field and proceeded to enroll in training to get his substance use disorder professional trainee (SUDPT) license. Jake said, “I decided to become certified as I really wanted to work in the field to help others that were struggling with addiction and were in the same place that I once was trapped.”

Jake started his career journey at American Behavioral Health Systems being a care team member. He then came over to Pioneer Center East (PCE) where he was hired in 2019 as a health coordinator while still going to school to get his Associate of Applied Science degree in addiction studies at Spokane Falls Community College (SFCC). In January 2020, he went to work in our clinical department at PCE so he could complete his hours as an SUDPT and work in the role that he was going to school for at SFCC.

In the interim, Kari had transferred over to PCE in January of 2019 and became the clinical SUD manager. Kari and Jake reunited as Jake now worked in the PCE clinical department getting his hours as a trainee. When Jake finished his SUDP trainee license, he applied for a part-time position at PCE that Kari had open for a counselor and he was hired. After working hard and providing exceptional service, he then moved into a full-time position that was open and has been working under Kari for more than two years now.

Recently, Jake received his SUDP license to become a fully licensed counselor. Kari shared, “I am so proud to know and work with Jake. He has come a long way since 2015 and it is so gratifying to know that I was able to assist him in his recovery journey while he was in Drug Court, and now I can be a mentor to him in his career as he excels in being a treatment counselor at PCE. He has come full-circle. Jake is a reminder to all of us at Pioneer on the importance of our work and the tools/support services that we share.”