A Continuum of Care Provides Adam with a Path to Stability 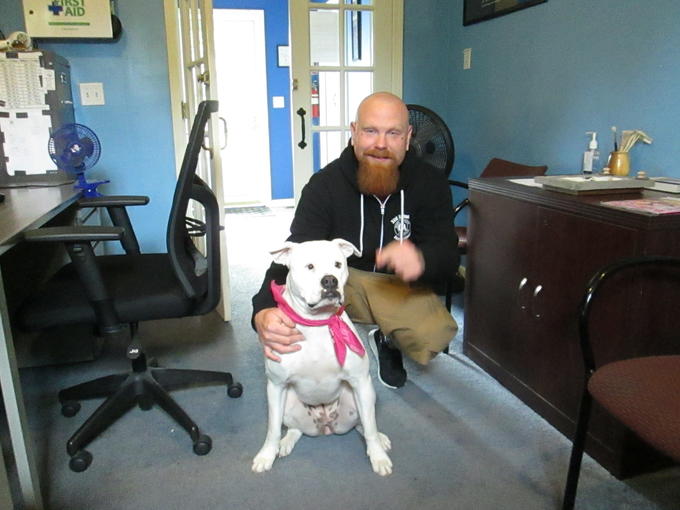 Pioneer staff believe in working together across programs to provide a continuum of care that guides and assists clients over time through a comprehensive array of behavioral health, housing and supportive services spanning all levels of intensity of care. Adam is a client that Pioneer employees worked together with to ensure he received the services needed every step of the way on his path to recovery from a history of substance abuse and homelessness.

Adam had lived on the streets since he was 13. His life of homelessness and alcohol addiction had built a protective wall around him mentally where he did not trust anyone and worked very hard to push everyone away. He maintained a very bad attitude towards other people, but this strategy was beginning to crack and not work for him anymore.

Whatcom Community Detox
Adam was wandering in an advanced state of inebriation between Whatcom County and Skagit County for a long time. Finally, he reached out for help and he came to the Whatcom Community Detox center that Pioneer operates. It wasn't until he met the director of the program, Mary Reed, that he finally began to believe that his life could – and was going to change.

Mary Reed shared, “When Adam arrived he had been homeless and had someone willing to watch his service dog named, Baby Girl. However, by the second day in detox Adam was really suffering from anxiety and stressing that he just needed to have his dog by him. I allowed Baby Girl to join him here at the center and it was the most profound transformation. Baby Girl ran into his arms, they sat down and the dog just kept licking his face with her tail wagging wildly. Adam’s anxiety disappeared in an instant and we could get him to focus on his recovery.”

Mary and her staff worked with Adam and talked to him about engaging in an intensive residential treatment program as the next step. She suggested Pioneer Center North (PCN) in Sedro-Woolley. The program uses evidenced-based practices specializing in treating substance use disorders and mental health issues. Mary had built a trust with Adam so he listened to her recommendation. The program admitted Adam and agreed that he could bring Baby Girl. Adam told Mary, “If I have my dog, then I know I can do this.”

Pioneer Center North
Once at PCN, Adam met both Brittany Boulton, behavioral health clinician; and Kasey Faughn, community engagement specialist; who worked very closely with him on his recovery and future plans. Brittany shared, “I remember when Adam arrived at PCN to participate in the regular substance use program and I read his assessment. I said to myself that he might need something extra. I met with him and suggested he participate in the co-occurring residential program at PCN to help him not only address his substance use but also to start working on reducing his social anxiety, PTSD, and depression. He agreed.”

In his first weeks in treatment, Adam struggled due to being in a new place and having other people around him. He also struggled while in treatment because he felt defeated and would often think about worst-case scenarios. Part of Adam’s feelings of defeat were due to his constant struggle with trying to find housing with Baby Girl. He had been denied housing on several occasions due to having a dog and other issues.

Adam was used to being alone and running from his problems. At PCN, he often would say negative things, but then he learned to reflect on his words and he realized that he was self-sabotaging himself and his recovery. Brittany shared, “Adam reported that this was the first time that someone would not allow him to run from his problems and would not give up on him, and that helped him to not give up on himself.” One of the things that kept Adam going at PCN was feeling truly cared about and getting the help he needed. Brittany said she often told Adam, “You might feel like giving up on yourself, BUT I AM NEVER GIVING UP ON YOU!” This helped him to see that there were people in the world that were willing to follow through with what they said they would do to help him. Again, this was helping Adam to develop a trust in others.

While at PCN, he reconnected with his love of drawing and immersed himself back into other things he enjoyed. He continued each day to talk with his sponsor and reflect on his thoughts daily. He embraced the changes as he gained the strength to look at himself, his behaviors and dreams. Adam did the work he needed to so he could build a better life.

Shelly said, “Adam has made remarkable progress towards his housing goals since I met him at PCN. He had been living outdoors on the streets and he was terrified that he was going to have to return to the streets when he left the treatment program. Thankfully, we all worked together and were able to get him into the Pioneer Transition House where he has able to stay while we worked on finding permanent housing for him and his Baby Girl.”

Pioneer Transition House
Kathy Peterson, housing placement coordinator at Pioneer Transition House received the referral from Shelly and met with Adam. They really hit it off as Kathy helped Adam feel cared for and reassured him that it was a good possibility that he would get into the house. Kathy said, “Adam was having a hard time finding housing but I saw what the other Pioneer staff saw in him – that spark of light and he was accepted!”

While living at Pioneer Transition House, Adam participated in intensive outpatient treatment and relapse prevention at Pioneer Counseling-Phoenix Recovery Services. He continues to work on his mental health issues. Recovery is a journey and Adam is staying on course to build a better life. He keeps in touch with Pioneer staff that have helped him along his way and is now a sponsor for two young men fresh in the program. “I have witnessed his growth and confidence build over the last few months. He sees the light and continues to walk towards it, while reaching out to bring others along with him. I sure will miss him and Baby Girl when he moves into permanent housing. Baby Girl often kept me company laying by the fireplace,” shared Kathy.

Adam shared with Kathy at the Pioneer Transition House that he noticed that Pioneer’s logo states “a Chance for Change” on it. He said that on his journey through many of Pioneer’s programs this has become his reality – he now has a “Chance for Change!”

Recently, Adam was approved for the Housing and Essential Needs program and received assistance with moving into his own apartment.  Shelly Jones and other staff worked on securing housing for him. Shelly said, “Adam has made huge strides of progress in all of his goals since he came to Pioneer Human Services. I could not possibly be more proud of him. He is a true Pioneer super star!”