Building Back a Successful Life 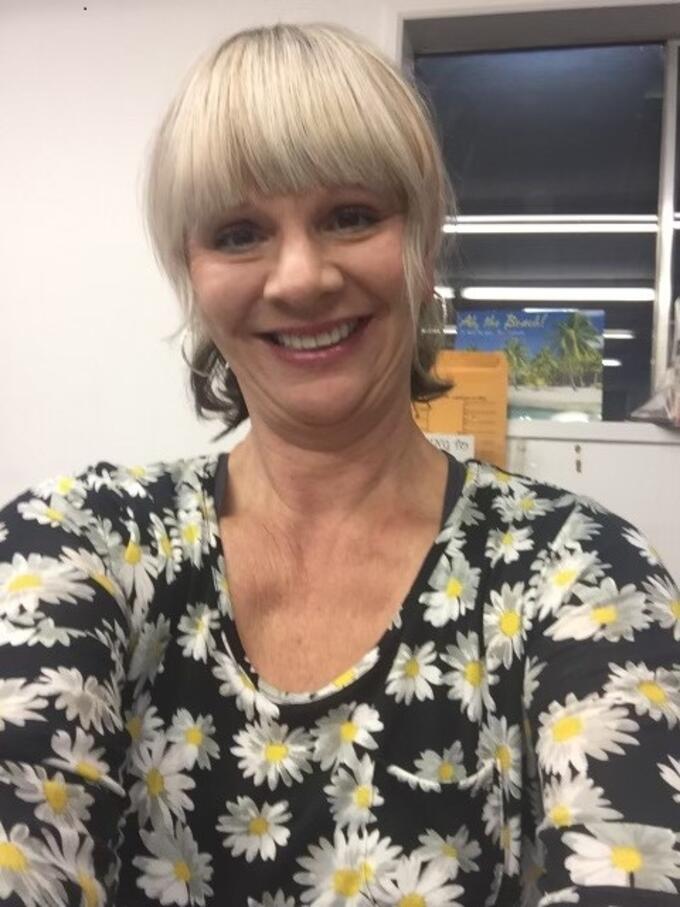 “I was given a feeling of acceptance when I started the Roadmap to Success job training program and was later hired at Pioneer Industries. When I started work at Pioneer Industries in 2011, I had lost everything – my home, marriage, job and self-confidence. My life had been turned upside down. However, I arrived on the job ready to learn, and I was surrounded by a supportive team that built up my self-confidence and treated me with respect to help me rebuild my life. A person can really grow and flourish under those conditions.”  Kat
--------------------------
Path to a Changed Life
Kat had experienced a good life. She had a thriving career as a sales manager and she was happily married with a son. However, things took a sudden dive when she was involved in a seven-car pile-up on Interstate 5 outside of Seattle. She broke several bones and crushed many vertebrae in her back. After a few surgeries, she was sent home with a bottle of OxyContin that contained at least 250 pills and a prescription for refills to address her constant pain. Unfortunately, that led to a severe addiction with the painkillers.

At first, Kat could get refills, but when the refills stopped, she resorted to buying the pills on the street and online from out of state pharmacies. She was able to keep her job during this time, but as the painkiller became scarcer, and prices skyrocketed, Kat took desperate measures to keep up her need for the drug.

Addiction had slowly started to take over her life and her marriage began to dissolve along with her better judgement. Kat was now a single mom working full-time and juggling a life that included addiction. In desperation, Kat started taking money from the company she worked for to help support her habit - until she was caught. The owner of the business fired her but decided not to press charges as long as she signed a seven-year non-compete so she could not work for any competitors and she had to agree to start detox and treatment. He knew her actions were motivated from a substance use disorder.

Kat went into detox and treatment and got clean. She found other employment with her skill set and  was working on building back a life, when almost seven years later two FBI agents pulled up in a black unmarked car at her house while she was watering the lawn. It turned out a family member of the former business owner that fired her decided to go after Kat to press charges for the money she had taken. On her lawn, she was arrested and placed in jail before she even realized what was happening.

Introduction to Pioneer and Roadmap to Success
Since Kat was clean and sober, and employed for almost seven years since being fired, the judge reviewed her case closely. It was Kat’s first offense and she was sent to a Department of Corrections state work release in Seattle to serve out her sentence. At the time, Pioneer Human Services operated the work release and that was Kat’s introduction to Pioneer.

“I was really scared when I landed in work release and realized that I needed to once again find work and move forward - but this time with a conviction history. One day, Pioneer employees came in to speak with the women in the work release about a job-readiness training program called 'Roadmap to Success' that Pioneer operated and they told us about the businesses that Pioneer operated. I learned that not all employers discriminated against individuals with a conviction history at the meeting so I signed up for the Roadmap program. In the program, I was taught how to talk about my past and how to pursue a new career despite having a criminal record,” said Kat.

Every day during the week, Kat took the bus to the Roadmap course from work release. When she graduated from the training program, Pioneer Industries (aerospace parts manufacturing) offered her an entry-level job and Kat jumped at the chance to be hired.

Employment at Pioneer Industries
Kat shared, “I remember that I would help out with whatever was needed and started absorbing information like a sponge so I could be useful in several areas. I started as a temp at Plant 1 in the photo copy masters (PCM) room rolling out aerospace drawings and I did many other odd jobs. I was trained on the job and everyone was very helpful and looking out for me.”  She added, “I then worked in the hardware room tracking parts and taking care of whatever was needed to fulfill aerospace parts orders. After eight months, I was hired on full-time as a Boeing tech to fulfill work orders and issue hardware. I was in my comfort zone now with a lot of support from Pioneer managers.”

Kat’s hard work and good attitude was noticed and she was offered a job as expeditor at Plant 2. Her responsibility was making sure parts were moving through the plant and being manufactured on time. After one year, she was moved to Plant 2 as expeditor and then two years later she was approached to move into working as a buyer. Kat was hesitant as she was nervous to take on the new position and all the responsibility, but the managers had confidence in her and pushed her forward to conquer her fears and excel in a new position. Today, Kat buys everything for Pioneer Industries from janitorial supplies to hardware and sheet metal! She has proven herself to be an excellent buyer and mentor to other employees.

“Often, I can just feel an employee in the plant needs help by their body language or questions. Someone might have questions on our medical insurance or benefits, or they are having an issue with paperwork or our enterprise resource planning (ERP) software. I was in their shoes once and it gives me great pride to have the opportunity to now help other employees and assist them in building back their confidence and self-respect,” stated Kat.

“Pioneer has been good to me. I have found that liking your co-workers really makes the difference in your career. I really like the people at Pioneer Industries and have never felt judged,” said Kat. She continued, “The best advice I can give to others that are in recovery or re-entering our communities after incarceration is to be patient and good to yourself. Seek counseling and treatment if you need it because you cannot - and should not - have to go through this alone. Surround yourself with positive people who support your new journey. Make yourself number one to get your life back on track.”

Kat and her partner recently purchased a beautiful home and she has a special and loving relationship that she treasures with her son and his family. On the side, Kat has been building the sales of Boagle Spice, an online company that sells a special spice her grandfather, Lew, created and used when he was a chef for Alaskan fisherman starting back in the 1940’s. The secret recipe was finally shared with the family and Kat now sells the delicious spice at https://boaglespice.com/.