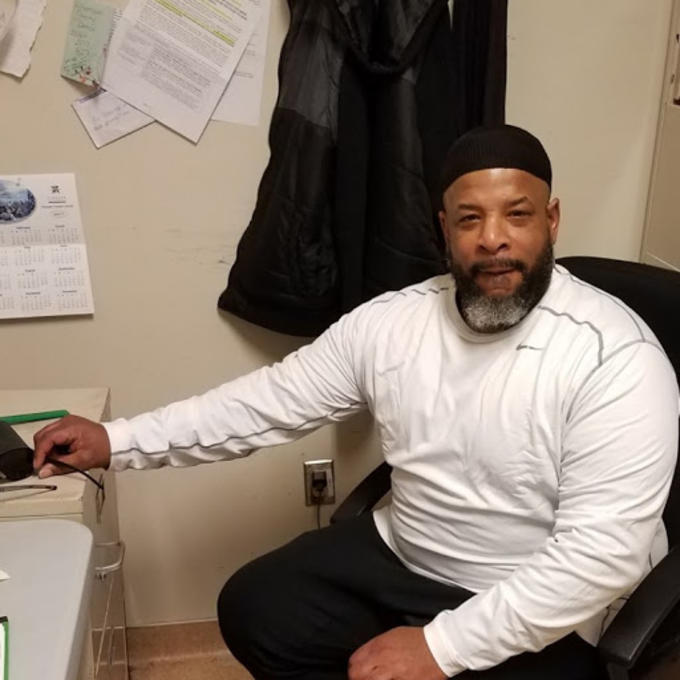 Askia works as a detox treatment specialist in the Whatcom Community Detox Center in Bellingham, Washington that Pioneer Human Services operates. He was gracious enough to share his journey of how he landed in detox and then ended up working in the center a few years later.

The Whatcom Community Detox Center (WCD) provides a monitored setting for the safe withdrawal from alcohol and other drugs. The detoxification is provided in a sub-acute (non-medical) unit where intensive medical monitoring is not required. In addition to stabilization and safety, the goal of these services is to assess people’s mental health and substance use disorder-related needs and help them access the services they need to recover.

I am sharing my story about my life struggles, opportunities and successes in the hope that it will encourage someone else. At first I did not want to write my story, but then I thought to myself that maybe by sharing my struggles, another person will see the opportunity for change.

My History
Over the years, I have been in and out of prisons, mental health institutions, detox facilities and homeless shelters all over this great country of ours. I have struggled with addiction and bad choices for most of my life. I always knew that I had a problem with drugs and alcohol but I picked up a survival technique that sustained my habit and had me living places like abandoned houses in Philly, New York and Baltimore known as “abandaminiums,” under the boardwalk in Atlantic City in places known as “sandaminiums, in a tent city in Tacoma, and in an outdoor area called the “jungle” in Seattle. That was life for me; depleting the resources that I could in one city, and moving to the next place. In November 2012, I somehow made my way to Bellingham, Washington and things changed for me.

Finding Whatcom Community Detox
After three days of staying at a mission, I got kicked out and was asked never to return because of my bad habits. I was standing outside cold, wet and hungry thinking about where I was going to sleep that night,  when a guy came up to me and said, “Hey, why you don’t call Whatcom Community Detox.” I looked at him and said, “DETOX, I don’t want to go to detox.” He kept talking and told me I could get something to eat, a shower and sleep in a real bed. So I agreed and he called WCD for me and left my name and cell number, and they called me back.

When I got to WCD I fell asleep on the kitchen floor and the staff could not wake me up because I knew that I was safe and indoors so I went into a semi-coma. The staff told me that they tried to wake me but I would not get up. When I finally woke up I thought that I was in jail and just laid there with my eyes closed until one of the staff members (Mary S) came over to me and said, “We have a bed for you. Would you like to get in it?”

Where is Home?
This detox experience was somehow different from all the others, even though I did not want to get clean or sober. I started re-evaluating my situation. There was this one staff member there named Dennis, he kept talking to me about going to treatment and I kept telling him that I have been to treatment over 10 times and treatment doesn’t work. A few days later I decided it was time to leave. I figured I could make my way to Canada. Yes – that was me back then and my addict way of thinking. So I told one of the staff members that I wanted to discharge and then went and got Dennis. We went into the office and Dennis never mentioned treatment but he asked me, “What’s up?” I told him I wanted to go home and he said, “OK, where is home?” For the first time in my life I actually heard that question, “Where is home?” I had been homeless from back in the time when I first lived in Philadelphia.

Making a Change
The day that Dennis questioned me about my home changed my life. I heard the information for the first time. I realized that I needed to stop telling people what is best for me and listen. My grandmother always told me a good talker is a good teacher and a good listener is a good student.

I decided to go to residential treatment again and was sent to a treatment facility in Spokane. I stayed there the entire 28 days and I left on Christmas Eve 2012. I came back to Bellingham because it was the one place that I hadn’t been locked-up at and I didn’t know anyone there. I went back to the mission that had previously asked me to leave and I begged them to let me stay there and they reluctantly agreed. I started to go to NA/AA meetings and I found a job. I moved in a clean and sober house and I stayed in contact with Dennis at Whatcom Community Detox.

Discovering My Passion
One day I called Dennis because I really wanted to drink and he actually talked to me, he told me to do something I always wanted to do. I always wanted to go to school but school was for suckers where I was from. But I took his advice and enrolled in school. When I was a juvenile I got a GED while I was at a reformatory school for boys. So in September, 2013 I enrolled in Skagit Valley College. While I was going to school one of my requirements was to volunteer in the community and so I called Dennis and asked him about volunteering Whatcom Community Detox and he said, “Yes.”

In 2014 I was so elated to be doing volunteer work at Whatcom Community Detox. Dennis then asked me if I would I accept a position to work there if there was an opening, but I said, “NO” because I was afraid of failing. However, about a year later I was offered a job at Whatcom Community Detox and I accepted! I was ready to take the job and I love it. In my position as detox treatment specialist, I get to help people like me in recovery - it is called giving back or paying it forward.

The Sky is the Limit
In 2016 at the age of 50, I had a high school diploma, and graduated from Skagit Valley College with an Associate degree in Chemical Dependency/Human Services. After I graduated from Skagit Valley College, I continued my education and in 2018 I graduated from Western Washington University with a Bachelor's degree in Chemical Dependency/Human Services - wow who knew? Eventually I will pursue a Masters’ degree but right now life is happening and I don’t have the time.

Throughout my journey I do have one regret; I regret not getting clean and sober sooner. But it is - what it is - my life, my story and my journey to success.  I’m not where I want to be in life yet – but I am sure NOT where I was. I’m grateful I have made it this far and hope to encourage and help others that struggled like I did.