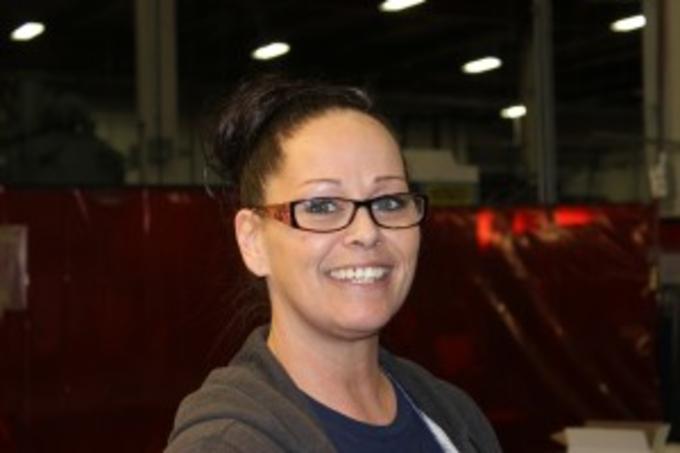 “Over the past year, I have learned a lot – including how to love myself. I have really stayed on the right track this time and I can say that I am proud of my accomplishments. Every direction I turn Pioneer has supported and helped me with what I need.”

This is Lynette’s second time working at Pioneer and she is excelling in her work. She has held positions in the aerospace metal/vinyl division, cargo liners and now she is working in the QA department. Lynette also was accepted into the AJAC Apprenticeship two-year sheet metal fabrication program. Lynette has a drive now to learn and succeed.

In her youth, Lynette had three horses that she cared for and competed in equestrian shows around the region. Her childhood was pretty normal. When she was a teenager her parents divorced and she started to feel like she didn’t fit in the social circles at school. After she graduated she went to work in warehouse/distribution centers and was doing pretty well until she was introduced to drugs by a boyfriend. Her addiction grew and after several years she lost custody of her children and was eventually incarcerated.

Her first time out she came through Pioneer’s training program and got employed in the manufacturing division but then she relapsed and fell back into the vicious cycle of addiction. When she was released from jail the second time, Lynette was sent to Pioneer’s Helen B. Ratcliffe work release program.

“Pioneer gave me a second chance as they know that recovery is a journey and we don’t all get it right the first time. They referred me into the Roadmap to Success training program my second time around, hired me at Plant 2 and have really been there for me. I have had 360 degrees of support from Pioneer between finding permanent housing for me in one of their facilities, offering case management and counseling services, and peer and supervisory support. I have received what I need to live my life in a positive way.”

In the apprenticeship, Lynette really stayed focused on her studies in the program and on her work at Pioneer Industries. She graduated from the AJAC apprenticeship in June 2018 and continues to build up her experience and skill set. She also is continuing to work on building back her relationship with her children.

“This path isn’t easy, but I have worked really hard to get this far and I don’t want to go back to my old ways. It’s so important to me to achieve what I know I can be, and build a bridge back to my children.”