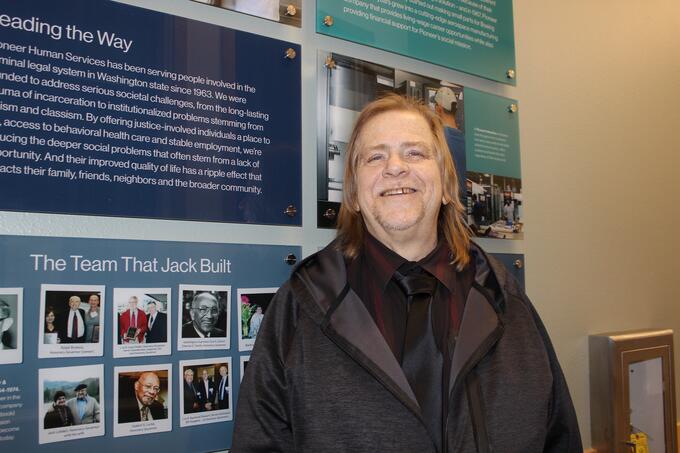 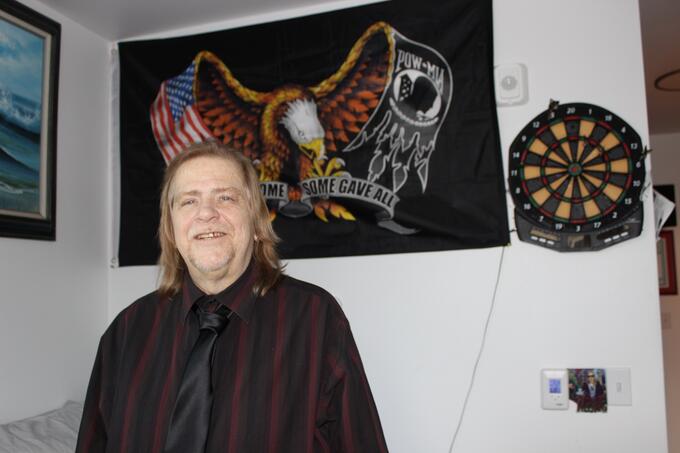 “You need to learn to trust people. To anyone struggling with addiction and homelessness, or involved in the criminal justice system, you need to realize that there really are people and organizations out there that want to help you”, shared Todd. He added, “Ask for help. If you don’t ask, you won’t find what you need. When I finally listened to others who had received help, I reached out and that was the start of my journey to stability.”

Aspen Terrace
Todd is a current resident in Aspen Terrace, Pioneer’s new affordable housing program on Capitol Hill in Seattle. After a little trepidation, he slowly got engaged in the social services and support programs at the housing program and now, despite his severe health issues, has become a lead volunteer and role model for other residents and locals in the neighborhood.

Todd regularly attends the weekly recovery support meetings in the Aspen Terrace community room, and he volunteers at the clothing drives where donated clothes are given to residents and locals in need. As a matter of fact, Todd was the person to suggest that the clothing drive be opened to the community in the courtyard as a goodwill gesture to the neighbors. Todd also engages in the art classes and works at setting up and breaking down displays at the food drives where donated food staples are given to residents to help them supplement their groceries. He encourages others to join in and participate in these services that can provide assistance where it’s needed.

Difficult Childhood
Starting in his early youth, Todd struggled with addiction, being homeless, and was involved in the criminal justice system. His father was a Vietnam veteran who abruptly left the family, to include his mom and sister, to start up a new family. Home life was dysfunctional at best. Unfortunately, his mom could not successfully run the business his dad left behind and she soon went bankrupt. She had issues with alcohol also and Todd remembers often not having any food to eat.

His mom remarried and focused on her new husband and her daughter. He became a street kid, smoking weed and drinking alcohol, committing burglaries and soon selling drugs to survive. Todd’s mom kicked him out of the home when he was 13 because she felt she could not control him. He became a ward of the courts and spent time in several juvenile detention facilities, even escaping a few times until he was caught again.

Adult Incarceration
By the time Todd was 17 years old, he was back in the community and working in the auto body and detailing business. He was learning a trade and good at his job, but had not dealt with his dysfunctional childhood. He started depending on alcohol and drugs again to numb the pain and soon had a firearm for protection. He was arrested and when he turned 18, he was charged as an adult. Todd was incarcerated on McNeil Island for three years as the courts knew he could not escape from there.

When Todd was released, he was hired at various jobs but ended up working again in the auto business. He married his girlfriend when he was young and was able to stay clean and sober for many years. However, one day he ran into old acquaintances looking to buy cocaine. Todd had heard of someone selling it and started the slippery slope of dabbling with it and falling back into addiction.

Todd got hurt on the job and that added to his substance use. This started a conflict in his marriage so he and his wife decided to move to Idaho to get away from it all. They could stay with family there until they got on their feet. Todd’s plan was to open a tattoo shop and his wife would continue her work as a visiting nurse.  Unfortunately, he had an unregistered firearm in the home, along with marijuana, and the police made a bust thinking he was selling drugs. He was charged with having a non-registered firearm, and with his past record he was given an eight-year prison sentence and his wife received 18 months.

Introduction to Pioneer Human Services
After prison, Todd was sent to the Pioneer Fellowship House (PFH), a federal residential reentry center, to serve out the remainder of his sentence. A Pioneer case manager enrolled him in Pioneer counseling and treatment classes where he started engaging in the program and found a firm foundation and resources. He was put on home confinement, but after three years of no violations – including no drugs or alcohol - his home life with his wife was breaking up and he started drinking again.  He was found in violation of his probation and sent back to PFH.

The PFH Staff worked closely with Todd and connected him to Pioneer housing staff who went out of their way to make sure that Todd had secure housing and resources at the former Mark Cooper House that Pioneer operated when he was released. That housing worked for Todd until he got into trouble with the U.S. Marshall and was sent to jail. Upon review, the courts found him too near his probation end date and so they took him off probation and released him to the street. He now had no access to PFH, but did not realize that he could access other Pioneer programs even if he wasn’t on probation.

Health Problems
Todd ended up living on the streets and suffered multiple stokes. A friend gave Todd the tip that Pioneer could still help him, so he went over to the housing office and ran into Stephanie Reavis and Michael Langone, the two housing employees that had helped him before. They were shocked to see his poor health condition and worked hard to get him an available apartment in Pioneer’s housing.

Todd lived in a few of Pioneer’s housing facilities before being moved into Aspen Terrace’s permanent housing. In the interim, his health condition declined with kidney failure, cancer and a heart attack being a few of his serious medical conditions. Pioneer staff focused on his recovery and are still amazed at his perseverance and strength.

Despite his health conditions, Todd remains a beacon of light at Aspen Terrace, insisting that his kidney dialysis appointments be scheduled around to fit in the recovery support meetings, and not conflict with his volunteering efforts at our support service programs. His behavior is exemplary for other residents and his positive attitude helps others who are struggling in recovery.

Ray of Light
Joseph Nagel, western Washington Housing director said, “Due to the support of Stephanie Reavis and other Pioneer staff, Todd maintained his housing and eventually was able to transfer into permanent housing at Aspen Terrace. All of us love working with him and find him to be a ray of positivity and a role model for others.”