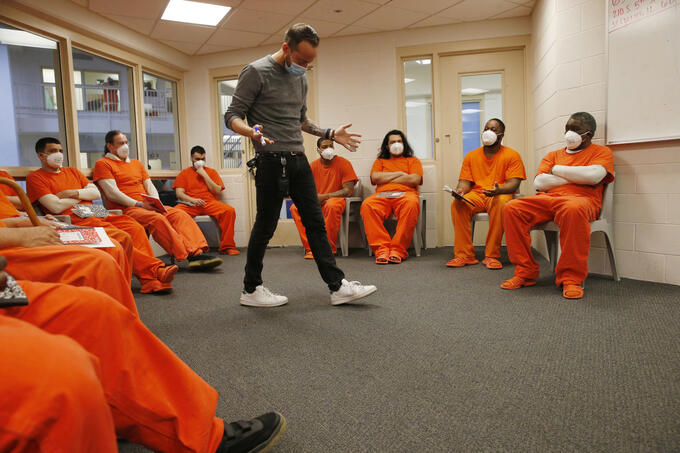 Did you know that Pioneer Human Services has in-jail treatment programs in Seattle and Spokane? At our King County Corrections-Based Substance Use Disorder (SUD) Treatment Program in the Norm Maleng Regional Justice Center; Ms. Allen, clinical SUD manager; and Mr. Sweaney, SUD professional; shared an inspiring story about Brian, an incarcerated client who was very motivated to make a positive change in his life.

The in-jail treatment program is a voluntary outpatient, Modified Therapeutic Community (MTC) with a recovery orientation, focusing on the whole person and overall lifestyle change.  The program consists of a complex array of services that includes trauma informed care, contingency management, with established evidence-based curriculum with a therapeutic community approach. Curriculum includes Living-in-Balance and Moral Reconation Therapy. All services are delivered on one of the medium security programming housing units.

Brian entered the voluntary in-jail outpatient treatment program in October of 2019. He realized he really needed help if he wanted to make a change in his life. Over the course of two years, Brian came to realize that his substance use disorder fed his self-defeating and self-destructive behaviors, and that led him to some of the more tragic life consequences he’s had to face.

His story begins as a toddler, when his older brother would blow Marijuana smoke in his face because it would be funny to watch his little brother intoxicated. Growing up, his family rarely lived in one place for very long, possibly due, in part to his parents’ own substance use struggles. In his early teens, Brian recalls moving into, what he called the “crack house.”  He remembers seeing his parents smoking crack for the first time, and saying to his brother, “This by far is one of the saddest days of my life.”

Through his teen years, he recalls beginning to drink alcohol, smoking cigarettes, using methamphetamine and marijuana. Since his parents were actively using drugs, Brian learned to survive with whatever he could, which was limited. Many times Brian would go without food and beg his mother for something to eat. There was one day he remembers having gone days with no food. When his father came to the house, he told Brian to get in the truck. They drove to the grocery store and his father told him to get whatever food he wanted. Brian filled the grocery cart with eggs, bacon and other food. When it came time to check out, Brian said, “My father and I walked out the front door, loaded the cart in the back of the truck, and drove away.”

That was the start of Brian’s criminal lifestyle. “I learned a new survival tool, steal to eat, steal to provide. So this is what I did,” said Brian. By age 14, he had racked up five felonies and multiple misdemeanor crimes, and spent most of his teen years in the juvenile system. When he turned 17, he was arrested for robbery, however, even with the charges reduced to theft he was charged as an adult and sent to prison for three years.

When Brian released from prison, he thought things would change. He met a woman and they had a daughter together. They tried hard to stay together, but Brian seemed compelled to continue his substance use and commit crimes. This led his girlfriend to leave him and take their daughter. For the next 15 years, Brian was in a tailspin of homelessness, substance use and crimes leading to a revolving door of being in and out of jail.

In 2019, Brian found himself in jail again. However, while he was incarcerated this time, he heard about a treatment program and decided to look into it because something had to change. The program he learned about was operated by Pioneer Human Services and was an MTC.

Brian stated, “When you have so much hate in you that you even hate yourself, life is a struggle; it feels like a job, a job that you hate.” Through hard work and an open mind, Brian began his journey and commitment of self-respect and wanting something different. “For the first time, I started to make an effort in my recovery, because I wanted something different in my life besides drugs, alcohol and violence.”

Brian came into the MTC saying, “I am angry, I have a big chip on my shoulder and I don’t think I will ever be able to talk to or see my daughter again.”  However, he joined the program but continually showed up late. He was having trouble waking up at first as he was used to living a life of crime at night. He told staff, “I have been running and gunning for the past five years and I need to change my sleeping pattern.” However, it was made clear to Brian that if he did not attend class on time, he could be discharged from the program. He reluctantly started attending regularly. In group sessions, Brian was asked to share. He said, “I started telling my story. I know my story is hard for most to believe me. Trust me I know, I lived it and it is still hard for me to believe. There is a lot I have left out because I don’t like reliving it.”

Brian really invested and committed himself to the treatment process. He learned recovery tools and gained greater personal awareness - all of which have benefited him while incarcerated. Brian has also begun to self-regulate his emotions and behaviors, which has led to affirmations by his peers, officers and clinical staff alike.

Brian shared, “Thanks to this program for showing and teaching me new ways to handle situations and for God leading me back to him. If I wasn’t here in this program, I would have been dead on the streets. I am truly blessed to have found this program. I can wake up and be thankful for another day and be happy, I’m ALIVE.”

Pioneer’s Ms. Allen stated, “The program has had a positive impact on Brian, so much so that he has indicated a desire to make a difference in other’s lives. He hopes to become a counselor himself someday and would make a great one!”