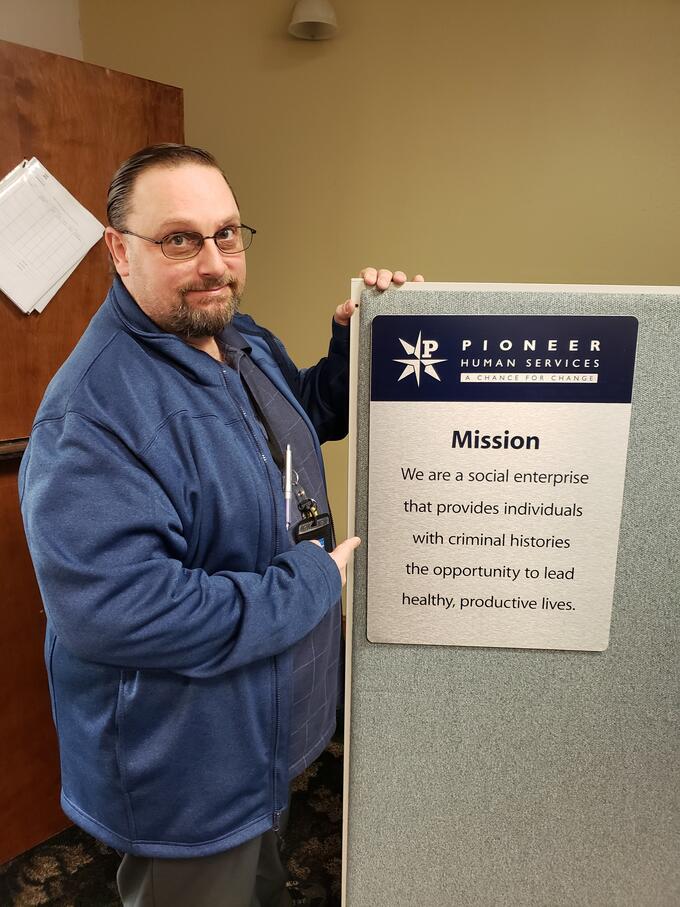 Our employment specialist, Joseph Parham, works at our Spokane Residential Reentry Center and shared his journey with us from addiction - to incarceration - to reentry and ministry services - to Pioneer. We are so grateful to have him as part of the Pioneer family!

It is a joy to be able to work with others who are preparing to re-enter society after being incarcerated.  I can relate with these individuals' struggles and really know how to connect with them due to my past experience. When I was released from jail, I made a pledge to myself and God that I would stay clean and sober, and follow the path to becoming an active and spiritual community leader, and responsible father. I have kept my pledge and am proud to say that I've been clean and sober for over 11 years now.

Facing My Past
My addiction, and criminal behavior to support my habit and make money, had caught up with me and I ended up in jail. Once I was locked up, I was brought to my knees when I finally had to face my path of destruction, substance abuse and criminal behavior.

I had completely failed as a father to my daughter and was now alone with no light at the end of the tunnel and no one to reach out to as all my relationships were either destroyed or the people close to me were now dead. All I could think was that I was destined to die a failure at life. More importantly, I felt guilt and shame because of my daughter; I had robbed her of having a father in her life and a normal childhood. Was this really all that I could give her? At this time my daughter was only nine years old. What a mess!

Finding the Strength to Recover
One day in jail I found myself crying out to God! I was mad and did not understand why I had been given this life that I was living. I said out loud, “I’m tired of doing it my way, because my way is wrong and I do not have the strength to go on. Everything I put my hands to, I destroy! I do not know what to do, or where to go? I don’t even know how to act.”  It was very cold, and dark . . . I had no reason to live! It was at that point that I got on my knees and asked for something that I knew was there but did not know how to attain it. I asked for God’s help and my prayers were answered as I had a rush of emotion and peace come over my whole body.

Who would have thought in a million years that soon I would be sitting in a room in jail with 20 guys praising the Lord while crying our hearts out? As I read the bible out loud I was often surrounded by other incarcerated men – some with violent pasts – and I taught  them about Christianity. After all the things I had done – I was amazed.

Getting Involved in the Community
After jail, I worked with Off Broadway Family Outreach (OBFO) and The Dream Center while also attending Family of Faith Community Church from 2008-2012, where I was a member of the praise and worship team for five years and taught advanced adult Bible study. I was also on the praise and worship team at OBFO, where I am currently a Treasurer and an active board member. I also had the privilege to be an acting founder/board member of Church of God in Spokane in 2012. During this time, I also was in college studying social services. In 2012, I graduated from the social services program at Spokane Falls Community College with a grade point average of 3.7. That was a something I was proud of and didn’t know I could accomplish!

Meeting Pioneer
In 2013, I was introduced to Pioneer Human Services and they hired me to work at the former Victory House for homeless Veterans. I didn’t experience any discrimination or push-back in the hiring process due to my past – they were more interested in where I was going. That was a solid step in the right direction and helped me to formulate the career I wanted looking forward. Then a year later, I started volunteering to do prison ministry with Dick & Shirley Main at Geiger Correctional Facility. I worked with them for two years and it was a full-circle position as they had administered to me when I was locked up in Geiger! It felt really wonderful to be in a position to give back.

At Pioneer, I was promoted to employment specialist/case manager for their Work Force Development division. My responsibilities included working with residents participating in the treatment programs at Pioneer Center North and the Emerson Clinic outpatient and drug court programs by teaching employment workshops and assisting participants with securing work, educational or training options to help them build their lives. In In 2018, I changed divisions and am currently employed as an employment specialist with both the Spokane Residential Reentry Centers that Pioneer operates. Through a contract with the Federal Bureau of Prisons, Pioneer serves men and women referred from federal prison to the two reentry centers in Spokane. Miracles do happen!

Counting My Blessings
Today I’m blessed to have a restored relationship with my mother after years of strife. I’ve also been married to my beautiful wife Kristie for seven years now and we are living in a home we own in Greenacres. I have bonded with my wonderful daughter that I neglected during my years of addiction and she is now 22-years old; and I have a beautiful son, Ryan, who is 14-years old. My family attends Greenacres Christian Fellowship with a fantastic Pastoral team, Bill & Judy Dropko, who have the heart of the Lord and the support of Off Broadway Family Outreach and numerous ministries around the world. Having the heart of the Lord; that is the key to living a redeemed and fulfilled life. And if I can make this major life change - so can you!