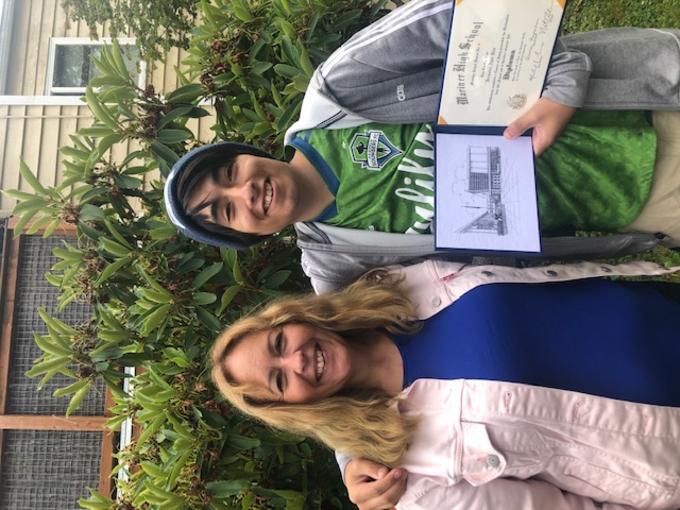 The Snohomish County Youth Programs (SCYP) are comprised of three residential homes that Pioneer Human Services operates serving boys between the ages of 13 to 18 years-old who are struggling with severe emotional, behavioral and/or psychiatric problems. Pioneer provides an array of specialized residential programs to serve youth, young adults and families in crisis. Our goal is to preserve families, if it is safe for the youth, and provide the tools and skills needed to prevent youth from entering the judicial system or from returning to it.

Mary Schroeder, director of SCYP shared a success story about Jermaine, a youth that was a resident twice at Sequoia House. Jermaine spent a year in the Sequoia house program before his aunt agreed to have him come live with her. Unfortunately, his transition to his aunt’s home did not work out and he returned to Sequoia house. The staff worked with him closely for the next two years and Jermaine was determined to gain the skills needed to live independently and move out to his own apartment.

He had to work through a lot of negative behaviors that plagued his past including physical aggression, property damage and assaultive behaviors. After about a year into his second stay, Jermaine started to relax and stopped his destructive behavior. Elizabeth Welch, Sequoia program supervisor said, “Jermaine started taking responsibility for his actions and his own mental health. He was able to wean himself off his medication with no negative consequences. I witnessed him starting to take positive steps to build a healthy new life for himself.”

Jermaine took another major step towards his independence when he secured a job and started saving money. He displayed responsibility and accountability on the job and it helped to build his confidence. By the time he was ready to move out, Jermaine had saved about $4,000 dollars to get an apartment and he was able to pay the security deposit, as well as first and last month’s rent. He now shares the apartment with another former Sequoia youth that he lived with and got to know.

Jermaine is now completely independent, working two jobs as well as studying to get his driver’s license. He has become proficient at budgeting and making sure his bills are paid. In his time living independently, Jermaine has learned the difference between “want” and “need” when deciding what to spend his hard-earned money on. Recently, he celebrated his graduation from high school and that was a great accomplishment that set him up to further his education. Jermaine now has plans to continue his education by attending Everett Community College in the fall.

Mary Schroeder, Director of Snohomish County Youth Programs said, “I had the pleasure of working with Jermaine and his roommate at their new apartment for three months once they left Sequoia House. I worked under an in-home Behavior Rehabilitation Services contract where I provided 24-hour support to the youth, helped them set up their apartment with furnishings from donations, and helped with some costs associated with apartment living until they accessed their foster care-to 21 years old- funds.” She added, “This was such an important service for them, as both youth had been in the Department of Child, Youth and Families system since they were six years old and they needed guidance on how to successfully live on their own.”

Schroeder and her team are so proud of Jermaine for putting in the hard work to improve his behavior, accept responsibility, engage in school and maintain employment. Now that he has his own apartment, it only adds to his accolades and path to having a successful life. Although the Sequoia team misses Jermaine, they feel so grateful to have been a part of his life and witnessed his growth.